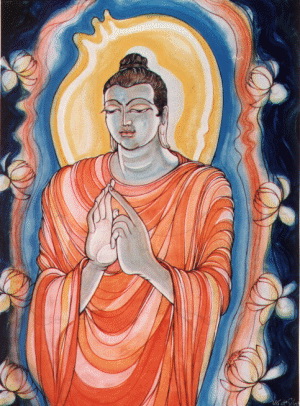 Not by a shower of gold coins does contentment arise in sensual pleasures. Of little sweetness, and painful, are sensual pleasures. Knowing thus, the wise man finds no delight even in heavenly pleasures. The disciple of the Fully Enlightened One delights in the destruction of craving. [186-187]

Once, there was a young bhikkhu at the Jetavana monastery. One day his teacher sent him to another monastery to study the Dhamma. While he was away, his father became seriously ill and died without seeing him. But his father had left some money for him with his youngest brother. On his return, his youngest brother told him about their father's death and about the cash left to him. At first, he said that he had no need of the money. Later however, he thought that it might be better to return to lay-life, and as a result, he became unhappy with the life of a bhikkhu. Gradually, he began to lose interest in his life and began to lose weight. So other bhikkhus persuaded him to seek the advice of the Enlightened One.

The discontented young bhikkhu told the Buddha that with the money left to him, he would be able to lead a comfortable life as a householder. The Buddha then advised him that for human beings there could never be enough, not even for Universal Monarchs with all their wealth and treasures. The Buddha then related the story of Mandhatu, the Universal Monarch who enjoyed the glory of the devas both in the Catumaharajika and Tavatimsa realms for a long time. After spending a long time in Tavatimsa, one day, Mandhatu wished that he were the sole ruler of Tavatimsa, instead of sharing it with Sakka. But this time, his wish could not be fulfilled and instantly he became old and decrepit and died soon after. Devas are extremely fragile beings who can be easily destroyed when they succumb to any strong emotionally upsetting passion.

After the admonition, the bhikkhu decided to remain in the Holy Order and worked diligently for his emancipation.