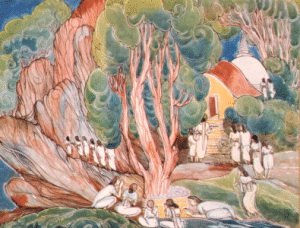 SEEK REFUGE IN THE BUDDHA, DHAMMA AND SANGHA

When threatened with danger, men go to many a refuge, — to hills, woods, groves, trees, and shrines. [188]

But such a refuge is not a safe refuge, not the best refuge. One is not liberated from all evil consequences of existence (dukkha) for having come to such a refuge. [189]

Aggidatta was the head priest during the time of King Maha Kosala, father of King Pasenadi. After the death of King Maha Kosala, Aggidatta gave away his property and left home to become an ascetic. He lived with his followers in a place near the border of the three kingdoms of Anga, Magadha and Kuru, not far from the dwelling place of a powerful naga. To his followers and the people of these three kingdoms, Aggidatta used to exhort: 'Pay homage to forests, mountains, parks and gardens, and trees; by doing so, you will be liberated from all ills of life.'

One day, the Buddha saw Aggidatta and his followers in his vision and knew that the time was ripe for them to attain Arahanthood. So the Buddha sent Venerable Moggallana to expound the Dhamma to Aggidatta and his followers, and said that he himself would follow afterwards. Moggallana went there and inquired whether he could spend the night at their place. At first they refused, but finally they directed him to the dwelling place of the naga. The naga was very antagonistic to Moggallana, and there followed a duel between the naga and the Chief Disciple. However, in the end, the naga was subdued. He coiled himself and raised his head spreading it out like an umbrella over Moggallana, thus showing respect for him. Early in the morning, Aggidatta and his followers came to find out the fate of Moggallana. When they found that the naga had been tamed, and was meekly holding his head like an umbrella over him, they were very much astounded, and paid their respects.

Just then, the Buddha arrived and Moggallana got up from his seat and paid homage to him, proclaiming 'This is my Teacher, the supreme Buddha, and I am but a humble pupil of this great Teacher!' Hearing him, the ascetics who had been impressed by the power of Moggallana were awed by the greater power of the Teacher. The Buddha then admonished him: 'Aggidatta, people go to mountains, forests, gardens and parks, and trees for refuge when they are threatened with danger, but these things cannot offer them real protection. Only those who take refuge in the Buddha, the Dhamma and the Sangha are liberated from worldly suffering.'

At the end of the discourse Aggidatta and all his followers attained Arahanthood. All of them were admitted to the Order of the bhikkhus. On that day, when the disciples of Aggidatta from Anga, Magadha and Kuru came to pay their respects to him, they saw their teacher and his followers dressed as bhikkhus and they were puzzled and wondered, 'Who is the more powerful? Our teacher or Gotama? Our teacher must be more powerful because Gotama has come to our teacher.' The Buddha knew what they were thinking. Aggidatta also felt that he must set their minds at rest. So, he paid homage to the Buddha and proclaimed, 'Venerable Sir! You are my Teacher, I am but a disciple of yours.' Thus, the audience came to realise the supremacy of the Buddha.