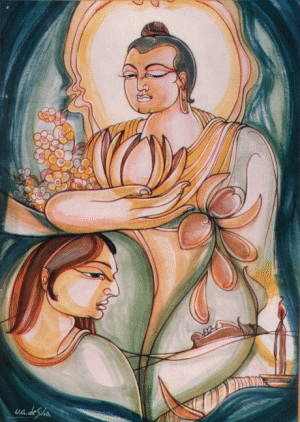 THE GOOD ARE RARE

Rare is birth as a human being. Hard is the life of mortals. Hard is the hearing of the Sublime Truth. Rare is the appearance of the Buddhas. [182]

XIV: 03 The king of Nagas and his daughter (Erakapatta)

Once, there was a naga king by the name of Erakapatta. In one of his past existences he had been a bhikkhu during the time of Kassapa Buddha, but because of his continuous and irrational regret over a misdeed he had committed, he was reborn as a naga. Erakapatta had a very beautiful daughter.

As nagas are able to transform themselves into human form, he proclaimed that whoever could answer his daughter's questions could claim her for a wife. Twice every month, his daughter would take the human form and dance in the open and sing out her questions. Many suitors tried to answer her questions hoping to claim her, but no one could give the correct answer.

One day, the Buddha in his vision saw a youth named Uttara. He knew that the youth would attain the first stage of Sainthood in connection with the questions put by the girl. By then the youth was already on his way to see her. The Buddha stopped him and taught him answers to those questions, as a result of which Uttara attained the first stage of Sainthood. Then he had no desire for the naga princess. However, Uttara still went to answer the questions for the benefit of others.

When Erakapatta heard the answers he knew that a Buddha had appeared in this world. So he requested Uttara to take him to the Enlightened One. On seeing him, Erakapatta paid homage and related why he was reborn as a naga. The Buddha explained that it was difficult to be born in the human world, and to be born during the lifetimes of the Buddhas or during the time of their Teachings.

At the end of the discourse, many bhikkhus who were the pupils of Sariputta attained Arahanthood and a great many from the congregation attained the first stage of Sainthood.

*Naga is a well-known mythological divine serpent in Buddhist and Hindu literatures who lives in the underworld. Naga is reputed to have miraculous powers. This is similar to the dragon as found in the Chinese literature.