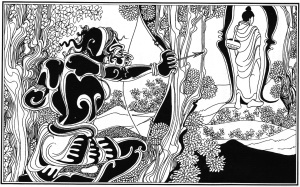 NO EVIL BEFALLS THOSE WHO HAVE NO BAD INTENTION

If no wound there be in one's hand, one may carry poison in it. Poison does not affect one who has no wound.
There is no ill for him who does no wrong. 1 [124]

IX:08 Kukkuta Mltta the hunter and his family comprehend the Dhamma

At Rajagaha there was once a rich young girl who had comprehended the Dhamma. A hunter by the name of Kukkuta Mitta came into town in a cart to sell venison. Seeing him, the young lady fell in love with him immediately. She followed him, married him and lived with him in a small village. As a result of that marriage, seven children were born to them and in the course of time, all of them got married. One day, the Buddha surveyed the world early in the morning and found that the hunter, his children and their wives were due to realise the Dhamma. So, the Buddha went to the place where the hunter had set his trap in the forest. He put his footprint close to the trap and seated himself under the shade of a bush, not far from the trap.

When the hunter came, he saw no animal in the trap but a footprint and surmised that someone must have come before him and let out the animal. So, when he saw the Buddha under the shade of the bush, he took him for the man who had freed the animal from his trap and flew into a rage. He took out his bow and arrow to shoot at the Buddha, but as he drew his bow, he became immobilised and remained fixed in that position like a statue. His children followed and found their father. They also saw the Buddha at some distance and thought he must be their father's enemy. All of them took out their bows and arrows to shoot at the Buddha, but they also became immobilised and remained fixed in their respective postures. When the hunter and his children failed to return, the hunter's wife followed them into the forest, with her in-laws. Seeing her husband and her children with their arrows aimed at the Buddha, she raised both her hands and shouted, 'Don't kill my father.'

When her husband heard her words, he thought, 'This must be my father-in-law', and her children thought, 'This must be our grandfather', and thoughts of loving-kindness appeared in their minds. Then the lady said to them, 'Put away your bows and arrows and pay respect to my father .' The Buddha knew that, by this time, the minds of the hunter and his children had softened and so he willed that they should be able to move and put away their bows and arrows. After putting away their bows and arrows, they paid their respects to the Buddha. He expounded the Dhamma to them. In the end, all of them understood the Dhamma.

The Buddha returned to the monastery and told the other bhikkhus about the hunter and his family. They then asked the Buddha, 'Venerable Sir, is the wife of the hunter who has comprehended the Dhamma also not guilty of taking life, if she had been getting things like nets, bows and arrows for her husband when he went out hunting?' The Buddha replied, 'Bhikkhus, those who are sotapannas don't kill, they don't wish others to get killed. The wife of the hunter was only obeying her husband in getting things for him. It never occurred to her to think she was helping her husband to commit evil deeds. Just as the hand that has no wound is not affected by poison, so since she has no intention to commit evil she has not created any bad kamma.'