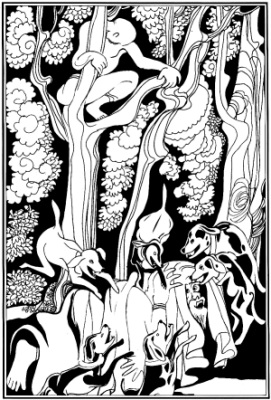 WHO HARMS THE INNOCENT COMES TO GRIEF

Whoever harms a harmless person, one pure and guiltless, upon that very fool the evil recoils like fine dust thrown against the wind. [125]

IX:09 A hunter who was attacked by his own dogs (Koka)

One morning, a hunter, by the name of Koka was going out to hunt with his pack of hound dogs. He met a bhikkhu entering the city for almsfood. He took that as a bad omen and grumbled to himself, 'Since I have seen this wretched one, I don't think I will get anything today,' and he went on his way. As expected by him he did not get anything. On his way home he again saw the same bhikkhu returning to the monastery after having had his almsfood in the city, and the hunter became very angry. So he set his hounds on the bhikkhu who swiftly climbed up a tree to a level just out of reach of the hounds. Then the hunter went to the foot of the tree and pricked his heels with the tip of an arrow. The bhikkhu was in great pain and was not able to hold on to his robes; so the robes slipped off his body on to the hunter who was at the foot of the tree.

The dogs seeing the yellow robe thought that the bhikkhu had fallen off the tree and pounced on the body, biting and pulling at it furiously. The bhikkhu, from his shelter in the tree, broke a dry branch and threw it at the dogs. Then the dogs discovered that they had been attacking their own master instead of the bhikkhu and ran away. He came down from the tree and found that the hunter had died and felt sorry for him. He also wondered whether he could be held responsible for the death, since the hunter had died by having been covered up by his yellow robes.

So, he went to the Buddha to clear his doubt. The Buddha consoled him, 'You are not responsible for the death of the hunter; your morality (sila) is also not soiled on account of that death. Indeed, that hunter did a great wrong to one to whom he should have done no wrong and so had come to this grievous end.'