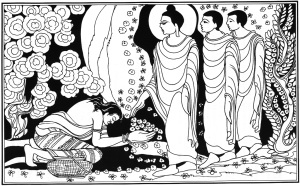 WELL DONE IS THAT DEED WHICH CAUSES NO REPENTANCE

That deed is well done when, after having done it, one regrets not, and when, with joy and pleasure, one reaps the fruit thereof.

V: 09 The strong devotion of a florist (Sumana)

A florist, named Sumana, had to supply King Bimbisara of Rajagaha with jasmine flowers every morning. One morning, on his way to the king's palace, Sumana on seeing the Buddha coming into town for almsfood accompanied by many bhikkhus felt a strong desire to offer his flowers to him. At once, he decided that even if the king were to drive him out of the country or to kill him, he would offer the flowers to the Buddha instead. Thus, with utmost devotion, he offered all his flowers. As the Buddha proceeded with the bhikkhus, and surrounded by the flowers, thousands of people came out to pay homage to the Buddha. As for Sumana, his entire body was suffused with delightful satisfaction (piti).

Sumana's wife then reported to the king that she had nothing to do with her husband's failure to deliver the flowers at the palace. In fact, the king was happy with the offering of flowers to the Enlightened One. The king also took the opportunity to offer almsfood to the Buddha and his bhikkhus.

After the meal, the Buddha returned to the Jetavana monastery. Then King Bimbisara summoned Sumana to the palace. The king praised Sumana for his great devotion to the Buddha. The king also applauded his bravery in offering the flowers and to show his appreciation gave him a big reward.

At the Jetavana monastery, when asked by Venerable Ananda what benefits Sumana would gain by his good deed done on that day, the Buddha explained that Sumana who without any consideration for his own safety in offering the flowers would not be reborn in any of the four lower forms of existence (apaya). Eventually one day he would gain release from the unsatisfactory state of existence.