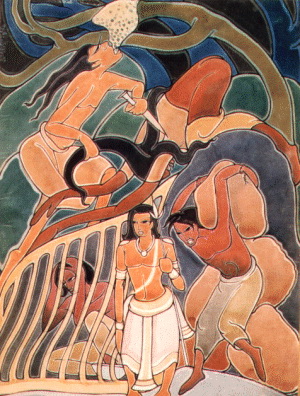 As sweet as honey is an evil deed: so thinks the fool so long as it ripens not; but when it ripens, then he comes to grief.

V:10 The young man who molested a nun (Uppala Vanna)

Once, there was a young daughter of a well-known family in Savatthi. Because she was so beautiful, with looks so tender and sweet, like a lotus flower, she was called 'Uppala Vanna'. The fame of her beauty spread far and wide and there were many suitors: princes, rich men and many others. But she decided that it would be better for her to become a bhikkhuni, a female member of the Holy Order. One day, after lighting a lamp, she kept her mind fixed on the flame and meditating on the 'fire kasina' as an object of concentration, she attained Arahanthood.

Sometime later, she moved to the forest and lived in solitude. While she was out on her almsround, Nanda, her cousin, came to her hut and hid himself underneath her couch. Nanda had fallen in love with her before she became a bhikkhuni and now his intention was to take her by force. When Uppala Vanna returned she saw Nanda and said, 'Do not be foolish! Do not harm, do not molest.' But he would not be stopped. After satisfying himself, he left her. For this terrible deed of molesting a holy person, he had to suffer for a long period.

When he heard of this incident, the Buddha sent for King Pasenadi of Kosala and told him about the dangers and difficulties that bhikkhunis living in forests had to face from irresponsible persons. The king then built monasteries for bhikkhunis within the city. From that time on bhikkhunis resided only within the city.