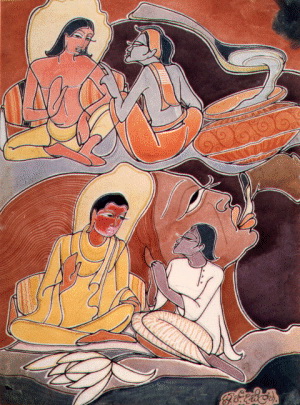 NOT WELL DONE IS THAT DEED WHICH CAUSES REPENTANCE

That deed is not well done when, after having done it, one regrets, and when weeping, with tearful face, one reaps the fruit thereof.

V:08 How the Buddha saved an innocent farmer

One day, some thieves were dividing some stolen valuables and cash amongst themselves in a field. After the division, they went away, but they accidentally left behind a bag of stolen money.

Early in the morning on that day, the Buddha, on surveying the world with his supernatural power, perceived that a farmer, cultivating near that field, would realise the Dhamma on that very day. So, the Buddha went there, accompanied by Venerable Ananda. The farmer on seeing the Buddha, paid respects to him and continued to plough the field. The Buddha on seeing the bag of money commented, 'Ananda, look at that very poisonous snake,' and Ananda replied, 'Venerable Sir, yes, it is, indeed, a very poisonous snake!' Then, both the Buddha and Ananda continued on their way.

The farmer on hearing the remarks, went to investigate if there really was a snake. Instead he found the bag of money. He took the bag and hid it. Just then, the people who had been robbed came to the field in pursuit of the robbers, and tracing the footprints of the farmer, found the bag of money. They beat up the farmer and took him to the king who sentenced him to death. They took him to the cemetery, to be killed, but the farmer kept on repeating, 'Ananda, look at that very poisonous snake! Venerable Sir, yes, it is, indeed, a very poisonous snake!' When the king's men heard the above dialogue between the Buddha and Ananda being repeated all the way, they were puzzled and took him back to the king, who guessed that the farmer was calling upon the Buddha as a witness; he was therefore taken to the presence of the Buddha. After hearing from the Buddha everything that had happened in the morning, the king remarked, 'If he had not been able to call upon the Buddha as a witness to his innocence, this man would have been killed.' The Buddha replied, 'A wise man should not do anything that he would regret after doing it.