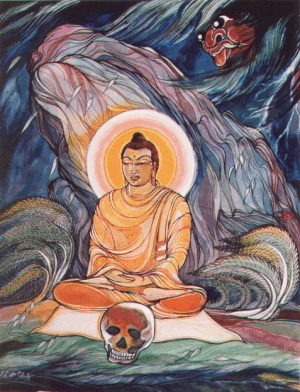 I:08 It is difficult to realise the truth (Upatissa and Kolita)

Upatissa and Kolita were two youths from Rajagaha. While watching a show they realised the unreality of things and decided to search for the way to liberation. First, they approached Sanjaya, the wandering ascetic at Rajagaha, but they were not satisfied with his teachings. So they separated and went all over the country after coming to an understanding that the one who found the true Dhamma should inform the other. Finally after much searching and not finding the true Dhamma, they came back to their native place.

One day, Upatissa came across Venerable Assaji and learned from him the gist of the Dhamma. The monk uttered the verse beginning with 'Ye dhamma hetuppabhava,' meaning, 'those phenomena which proceed from cause'. Listening to the verse, Upatissa attained Sotapatti. Then, as promised, he went to his friend Kolita, and explained that he, Upatissa, had attained the state of Deathlessness and repeated the verse to his friend. Kolita also attained Sotapatti at the end of the verse. They both remembered their former teacher and so went to Sanjaya and said to him, 'We have found one who can point out the Path to Deathlessness; the Buddha has appeared in the world; the Dhamma has been revealed; the Sangha has been formed. Come, let us go to the Teacher.' Sanjaya refused to go along with them.

So Upatissa and Kolita, with many of their followers, went to the Buddha, at Veluvana. There, they were admitted into the Order as bhikkhus. Kolita as son of Moggali became known as Moggallana and Kolita was given the name Sariputta. On the seventh day after the ordination, Moggallana attained Arahanthood. Sariputta achieved the same a fortnight after his ordination. The Buddha made them his two Chief Disciples.

The two Chief Disciples then related to the Buddha the meeting they had with their former teacher. Sanjaya had told them that he had been a teacher to so many pupils, and that for him to become the disciple of the Buddha would be like a jar turning into a drinking cup. Besides, only a few people were wise and the majority were ignorant. He suggested that the wise should go to the Buddha and the ignorant could follow him.

The Buddha then pointed out that Sanjaya's false pride was preventing him from seeing the truth as truth. He was mistaking untruth for truth and thus he would never realise the truth.

Sara means the core or essence. Asara are the unessentials like the necessaries of life, false beliefs, etc. Sara are the essentials like right beliefs, (samma ditthi), morality (sila), concentration (samadhi), wisdom (panna), etc. The essence of the Holy Life cannot be achieved by caring for unessentials.

In the Maha Saropama Sutta (Majjhima Nikaya, No. 29) the Buddha has compared the leaves and branches of a tree to gain and fame, the bark to morality, the greenwood to concentration, the fruits to the five kinds of super-intellect (abhinna) and the core to Arahanthood.

Such as lust (kama), ill will (vyapada), and harmfulness (vihimsa).

Such as renunciation or non-attachment (nekkhamma), loving-kindness (avyapada) and harmlessness (avihimsa).

These pure thoughts constitute the second factor of the Noble Eightfold Path.