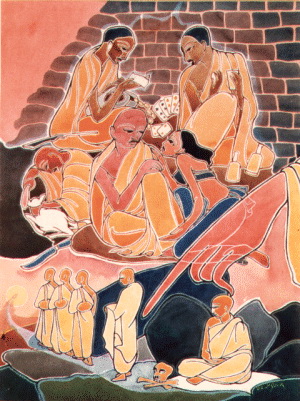 I:07 Who is worthy to receive the yellow robe? (Devadatta)

Once, the two Chief Disciples, the Venerable Sariputta and the Venerable Moggallana, went from Savatthi to Rajagaha. There, the people of Rajagaha invited them, with the other bhikkhus, to a morning meal. On that occasion someone handed over a very valuable piece of cloth to the organisers of the almsgiving ceremony. He instructed them to sell it should there be any shortage of funds. If there was no shortage, they were to offer it to any one of the bhikkhus they considered deserving of it. It so happened that there was no shortage of anything and the cloth was to be offered to one of the monks. Since the two Chief Disciples visited Rajagaha only occasionally, the people thought that it would be more appropriate to offer the cloth to Venerable Devadatta as he was a resident of Rajagaha. Thus they made the mistake of offering the cloth to Devadatta.

Devadatta promptly made the cloth into a robe and started wearing it. Then, a certain bhikkhu from Rajagaha came to Savatthi to pay homage to the Buddha, and told him about Devadatta and the robe. The Buddha then said that it was not the first time that Devadatta was wearing robes that he did not deserve. The Buddha then related the following story:

Devadatta was an elephant hunter in one of his previous existences. At that time, in a certain forest, there lived a large number of elephants. One day,the hunter noticed that these elephants knelt down to a paccekabuddha* on seeing him. Having observed that, the hunter stole the upper part of a yellow robe and covered his body and hand with it. Then, holding a spear in his hand, he waited for the elephants on their usual route. The elephants came, and mistaking him for a Paccekabuddha paid their respects and easily fell prey to the hunter. Thus, one by one, he killed the elephants.

The Bodhisatta (the Buddha-to-be) who was born as an elephant in the group, was the leader of the herd. Noticing the dwindling number of his herd he decided to investigate and followed his herd at the end of the line. He was alert, and was therefore able to evade the spear. He caught hold of the hunter in his trunk and was about to dash him against the ground. When he saw the yellow robe however, he desisted and spared the life of the hunter.

Kasava means stains of passion. Kasava means a dyed robe, the outward symbol of renunciation. Robes of monks are dyed to make them valueless. Here is a pun on words. External mark of the Holy Life is of no consequence without internal purity. On another occasion the Buddha remarked that a pure person is indeed an ideal recluse or Bhikkhu (because he has destroyed passions), irrespective of his external apparel.

Paccekabuddha : One who, like the Buddha, is self-Enlightened in the Four Noble Truths and has uprooted all the moral defilements (kilesas). However, he does not teach others.

Paccekabuddhas appear during the absence of the Buddha Sasana (Teaching).