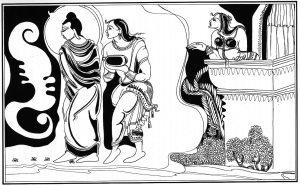 I:9 Meditating for the sake of a girl (Nanda)

Once the Buddha was residing at the Veluvana monastery in Rajagaha. His father King Suddhodana repeatedly sent messengers to the Buddha requesting him to visit the city of Kapilavatthu. Accordingly, the Buddha made the journey in the company of a large number of Arahants. On arrival at Kapilavatthu, he related the Vessantara Jataka to the assembly of his relatives. On the second day, he entered the city, where he recited the verse beginning with 'Uttitthe Nappamajjeya...' (i.e. one should arise and should not be unmindful...) His father attained Sotapatti upon listening to this verse. On arrival at the palace, the Buddha recited another verse beginning with 'Dhammam care sucaritam...' (i.e. one should practise the Dhamma...) the King attained Sakadagami. After the almsgiving he narrated the Canda Kinnara Jataka, with reference to the virtues of Rahula's mother, who had been the Buddha's wife before his renunciation.

On the third day, the marriage of Prince Nanda, the step-brother of the Buddha was being celebrated. The Buddha went to Nanda's house for alms and handed his alms bowl to Prince Nanda. Then the Buddha departed without taking back the bowl. So the prince had to follow the Buddha because it would have been disrespectful to return the bowl. The bride, Princess Janapada Kalyani, seeing the prince following the Buddha rushed forth and cried out to the prince to come back soon. At the monastery, the prince was admitted into the Order as a bhikkhu.

Later, the Buddha moved into the monastery at Jeta Park in Savatthi. While residing there Nanda was discontented and half-hearted and found little pleasure in the life of a bhikkhu. He wanted to return to the life of a householder because he kept remembering the words of Princess Janapada Kalyani, imploring him to return soon.

Knowing this, the Buddha, by supernormal power, showed Nanda the beautiful female devas of the Tavatimsa world who were far prettier than Princess Janapada Kalyani. Nanda was told that he could have one of them if he strove hard in the practice of the Dhamma. Other bhikkhus ridiculed Nanda by saying that he was like a hireling who practised the Dhamma of the sake of a beautiful girl. Nanda felt very much tormented and ashamed. So, in seclusion, he strove diligently in the practice of the Dhamma and eventually attained Arahanthood. As an Arahant, his mind was totally released from all attachments, and naturally his mind was purified of lustful thoughts of any kind. This had been foreseen by the Buddha right from the very beginning.

Other bhikkhus, having known that Nanda was not happy in the life of a bhikkhu, again asked him how he was faring. When he answered that he had no more attachments to the life of a householder, they doubted Nanda and they informed the Buddha about the matter. The Buddha then explained to them that previously, the nature of Nanda was like that of an ill-roofed house, but now, it had developed and was like a well-thatched dwelling. From the day Nanda saw the beautiful female devas of the Tavatimsa world, he strove to gain release from samsara - the cycle of birth and death. The Buddha then confirmed that Nanda had indeed won the ultimate goal of a bhikkhu by realising the Four Noble Truths and becoming an Arahant.

At the conclusion of the discourse, many bhikkhus were benefited and realised the Dhamma.

Bhavitam,lit., made to become, i.e., trained, cultivated, developed. Mind is trained by concentration, which leads to one-pointedness of the mind and mental purification, and by contemplation, which leads to the understanding of things as they truly are. The ultimate goal of a Buddhist is achieved by these two stages of mental development. As physical exercise is to the body, so is meditation to the mind. A well-developed mind is not easily dominated by passions.