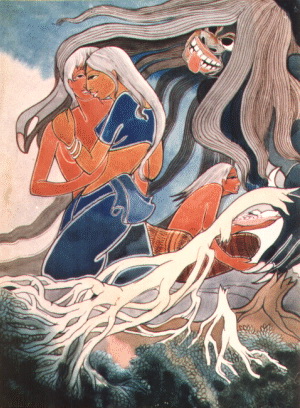 THE WEAK SUCCUMB TO TEMPTATION BUT NOT THE STRONG

Whoever lives contemplating pleasant things, with senses unrestrained, in food immoderate, indolent, inactive, him verily Mara overthrows, as the wind (overthrows) a weak tree.
Whoever lives contemplating the Impurities', with senses restrained, in food moderate, full of faith, full of sustained energy, him Mara overthrows not, as the wind (does not overthrow) a rocky mountain

I:06 The fate of Mahakala and Culakala who became monks

Mahakala and Culakala were two merchant brothers. While travelling about selling their merchandise they had the opportunity to listen to a discourse given by the Buddha. After hearing the discourse Mahakala became a bhikkhu by conviction while Culakala also became a bhikkhu but without any faith.

Mahakala was serious in his meditation and diligently meditated on decay and impermanence of the body at the cemetery. He finally gained Insight and attained Arahanthood. Culakala was not interested in spiritual development and was constantly thinking of sensual pleasures.

Arriving at the village gate the bhikkhus expressed their apprehension that Mahakala would be persuaded by his former wives to leave the Order as had happened to Culakala. To this, the Buddha replied that the two brothers were different. Culakala indulged in sensual pleasures and was weak minded. Mahakala, on the other hand, being free of sensual pleasures, was diligent, steadfast and strong in his faith in the Buddha, the Dhamma and the Sangha. The Buddha said the weak succumb to temptation but not the strong.

Desiring pleasurable sensual objects.
According to Buddhism there are five kinds of Maras - namely,
i. the five Aggregates (khandha),
ii. moral and immoral (abhisankhara),
iii. death (maccu),
iv. passions (kilesa), and
v. Mara the deity (devaputta).
Here the term Mara is used in the sense of passions.
The thirty-two impurities of the body such as hair, hair of the skin, nails, teeth, skin etc. To overcome lust, meditation on the impurities of the body is recommended.
Saddha is faith in the Buddha (the Teacher), the Dhamma (the Teaching) and the Sangha (the Order), based on knowledge. There is no blind faith in Buddhism. One is not expected to accept anything on mere unreasoning faith.
These two verses are meant exclusively for Bhikkhus who lead the Holy Life. The first verse indicates the worldly path of sense-gratification, the second, the spiritual path of sense-control and asceticism. It should be noted that Buddhism offers one way of life to the monks and another to the laity.