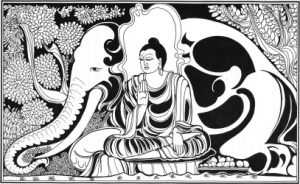 The others know not that in this quarrel we perish those of them who realize it, have their quarrels calmed thereby.

I:05 The quarrelsome bhikkhus of Kosambi

A trivial incident led to an unfortunate dispute amongst the bhikkhus of Kosambi. One group followed the master of Vinaya and the other followed the teacher of the Dhamma and they were often quarrelling among themselves. They did not even listen to the Buddha's advice, but the Buddha knew that eventually they would realise their mistake. So he left them and went to spend the vassa (the rainy season retreat) all alone in the forest, where an elephant and a monkey attended to him.

The lay disciples of Kosambi, on learning the reason for the absence of the Buddha, refused to make offerings to the bhikkhus. This made the latter realise their folly and a reconciliation took place. Still, the lay followers would not treat the monks as respectfully as they had done before, until they admitted that it was their fault that the Buddha had left the vicinity. They were told to ask the pardon of the Buddha. But the Buddha was away and it was in the middle of the vassa; so the bhikkhus of Kosambi spent the vassa in misery and hardship.

At the end of the vassa, Venerable Ananda and many other bhikkhus conveyed the message to the Buddha and implored him to return assuring him that they had realised the error of their ways. In due course, the Buddha returned to the Jetavana monastery in Savatthi. When the bhikkhus saw the Buddha, they paid their respects and admitted their faults. The Buddha then admonished them that life is impermanent and therefore, they must stop their quarrels and not act as if they would never die.