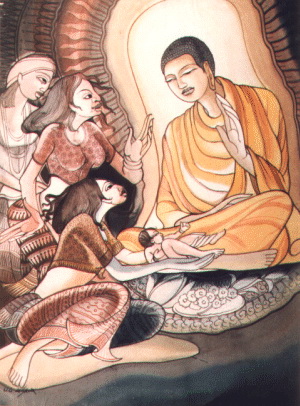 ANGER IS CONQUERED BY LOVE

Hatreds never cease through hatred in this world;
through love alone they cease. This is an eternal law

I:04 The bitter feud through various existences (Kala Yakkhini)

Once there lived a householder, whose wife was barren. Being unable to bear a child and afraid that she would be mistreated by her husband and her mother-in-law, she herself selected and arranged for her husband to marry another woman. But on two occasions, as soon as she knew the second wife was pregnant, the barren wife gave her food mixed with drugs causing her to have miscarriages. On her third pregnancy, the fruitful wife kept it to herself without informing the barren wife. But when the latter came to know about it, she again caused an abortion. Eventually the second wife died in childbirth. Before her death, the unfortunate woman was filled with hatred and vowed vengeance on the barren wife and her future offspring. Thus the feud started.

Among their later existences the two were reborn as a hen and a cat; a doe and a leopardess; and finally as the daughter of a nobleman in Savatthi and an ogress. One day the demon (Kala Yakkhini) was in hot pursuit of the nobleman's daughter and her baby. When the lady heard that the Buddha was giving a religious discourse at the Jetavana monastery, she fled to him and placed her son at his feet for protection. The demon was thus prevented from entering the monastery. She was later called in and both the lady and the ogress were admonished by the Buddha. The Buddha told them about their past feud as rival wives and how they had been harbouring hatred towards each other and killing each other's offspring through their various lives. They were made to see that hatred could only cause more hatred, and that it could only cease through friendship, understanding and goodwill. Both realised their mistakes, and on the admonition of the Buddha, made their peace with each other.

The Buddha then requested the woman to hand over her son to the ogress. Fearing for the safety of her son, she hesitated, but because of her devotion and confidence in the Enlightened One she handed over her son as directed.

The child was warmly received by the ogress. After kissing and caressing the child tenderly like her very own son, the ogress handed over the child back to his mother. As a result of this episode, there was much goodwill on both sides.

Avera, literally, means non-anger. Here it means the virtue opposed to the vice of anger, that is, loving-kindness (Metta).
Sanantana, an ancient principle followed by he Buddha and His disciples. (Commentary)