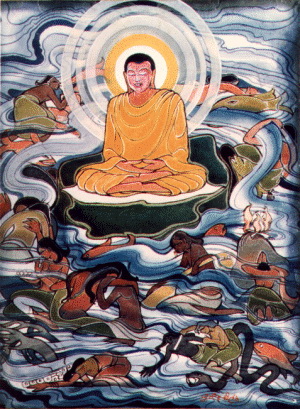 RETALIATION DOES NOT LEAD TO PEACE

I:03 The old man who retaliated (Tissa)

Tissa, a cousin of the Buddha, had become a bhikkhu only in his old age. He liked to pose as a senior bhikkhu * and was very pleased when visiting bhikkhus asked his permission to do some service for him. On the other hand, he failed to pay due respect to the senior bhikkhus. Besides, he often quarrelled with the younger bhikkhus. Should anyone rebuke him on account of his behaviour he would go complaining to the Buddha, weeping, very much dissatisfied and very upset. The Buddha who understood the position advised Tissa to change his behaviour and not to harbour thoughts of hatred against anyone for hatred could only be eradicated by not harbouring hatred.

An island situated on a higher level cannot be flooded although the surrounding low lying land may be inundated. Such an island becomes a refuge to all. In the same way the wise man who develops insight should make an island of himself by attaining Arahanthood so that he may not be drowned by the four floods of sense-desires (kama), false beliefs (ditthi), craving for existence (bhava) and ignorance (avijja).

We must understand that Cula Panthaka did not attain Arahanthood in a short period. He had prepared himself over many life times. The Buddha helped him to remove his residual impurities and finally release his mind from the defilements created by ignorance.