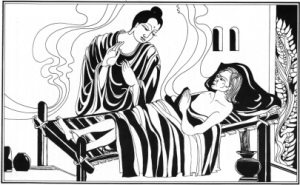 Mind is the forerunner of (all good) states. Mind is chief; mind-made are they. If one speaks or acts with pure mind, because of that, happiness follows one, even as one's shadow that never leaves.

Mattha Kundali was a young brahmin, whose father was very stingy and never gave anything in charity. Even the gold ornaments for his only son were made by himself to save payment for workmanship. When his son was suffering from jaundice, no physician was consulted until it was too late. When he realised that his son was dying, he had the youth carried outside to the verandah so that people coming to his house would not see his possessions.

On that morning, the Buddha arising early from his deep meditation of compassion, saw, in his Net of Knowledge, Mattha Kundali lying in the verandah. So when entering Savatthi for almsfood with his disciples, the Buddha stood near the door of Mattha Kundali's house. The Buddha sent forth a ray of light to attract the attention of the youth, who was facing the interior of the house. The youth saw the Buddha. He was very weak and he could only profess his faith but he thereby gained some happiness. But that was enough. When he passed away with his heart in devotion to the Buddha he was reborn in the Tavatimsa celestial world.

From his celestial abode he saw his father mourning over him at the cemetery and appeared to the old man in the likeness of his old self. He told his father about his rebirth in the Tavatimsa world and advised him to approach the Buddha, offer alms and listen to the Buddha's sermon. The old man did as he was told and after the sermon, the question was brought up as to whether one could be reborn in a celestial world simply by mentally professing profound faith in the Buddha, without practising charity or observing the moral precepts. So the Buddha willed that Mattha Kundali should appear in person. Mattha Kundali appeared in his celestial glory and told them about his rebirth in the Tavatimsa world. Only then did the listeners become convinced that the young man had attained much glory by simply devoting his mind to the Buddha.

At the end of the discourse, the old man realised the Dhamma and donated most of his wealth to the cause of the Dhamma.

In this particular verse dhamma refers to good Kamma (action).

These two parallel verses were uttered by the Buddha on two different occasions to show the inevitable effects of evil and good Kamma respectively.

Man reaps what he has sown in the past or in the present. What he sows now he reaps in the present or in the future at the opportune moment. Man himself is mainly responsible for his own happiness and misery. He creates his own hell and heaven. He is the architect of his own fate. What he makes he can unmake.

Buddhism teaches self-responsibility and the inevitability of the law of cause and effect.

What one reaps accords with what one has sown, but one is not bound to reap the effects of all that one has sown. If one were, emancipation would become an impossibility.