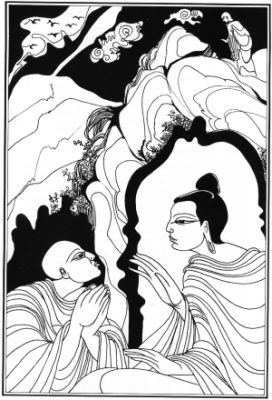 WITH JOY AND FAITH TRY TO WIN YOUR GOAL

Full of joy, full of confidence in the Buddha's Teaching, the bhikkhu will attain the Peaceful State, the stilling of conditioned things, the bliss (supreme). [381]

XXV: 11 Admiration of the Buddha (Vakkali)

Vakkali was a brahmin who lived in Savatthi. One day when he saw the Buddha going on an almsround in the city, he was attracted to the serene and calm appearance of the Buddha. He became very attached to him and joined the Order just to be near him. As a bhikkhu, Vakkali always kept close to the Buddha, thus neglecting his duties and spiritual development. So the Buddha advised him, 'Vakkali, it is not profitable for you to look at my body which is full of impurities. Only those who see the Dhamma see me. One who does not see the Dhamma does not see me. So, you must leave my presence.'*When he heard those admonitions Vakkali felt very depressed and could not tolerate it. He left the monastery and wanted to commit suicide by jumping down from the peak of a mountain.

The Buddha knowing full well the extent of Vakkali's grief and pain, reflected that he might miss the chance of attaining Sainthood. Accordingly, he sent forth his radiance to Vakkali, made him feel his presence and appeared as if in person to Vakkali. With the Buddha near him, Vakkali soon forgot all his sorrow, he became calm and mindful. Thus calmed, he developed a new resolution to purify his mind and soon after, he attained Arahanthood.

*Attachment hinders spiritual development. For this reason, Buddhism does not encourage any personality cult, however great or holy a religious teacher might be. In the Buddha's Teachings we have to work for our own emancipation without depending on others.