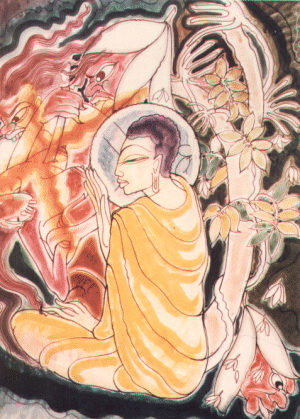 HE WHO GUARDS HIMSELF LIVES HAPPILY

YOU ARE YOUR OWN SAVIOUR

Nangala Kula was a poor labourer. One day, a bhikkhu seeing him ploughing a field in his old clothes, asked him if he would like to become a bhikkhu. Thus he became a bhikkhu and left his plough and old clothes by a tree not far away from the monastery. After some time, he became discontented with the monastic life and thought of returning to the layman's life. Whenever this feeling arose in him, he would go to the tree where he had left his plough and old clothes. There he would reproach himself saying, 'You still want to put on these old rags and return to the hard life of a labourer.' After reproaching himself, his dissatisfaction with the life of a bhikkhu would disappear. Thus he went to the tree whenever he was discontented with the life of a bhikkhu.

When questioned by other monks about his frequent visits to the tree, he replied, 'I have to go to my teacher.' In course of time he attained Arahanthood and stopped going to the tree. Other bhikkhus, asked him teasingly, 'Why don't you go to your teacher now?' He replied, 'I used to go to my teacher because I had need of him: but now, I have no need to go to him.' Other bhikkhus then asked the Buddha whether he was telling the truth. The Enlightened One replied, 'My son is telling the truth. Nangala Kula, by reproaching himself, has indeed attained Arahanthood.