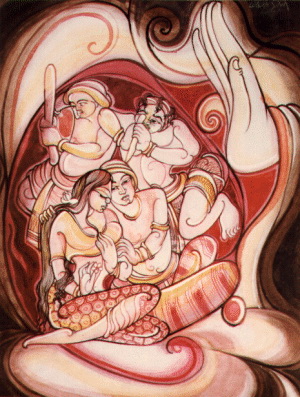 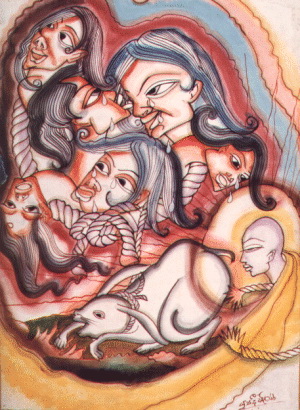 THERE IS SUFFERING AS LONG AS THERE IS CRAVING

LUSTFUL THOUGHTS ARISE IN HIM WHO HAS CRAVING

CUT OFF CRAVING WITH WISDOM

ATTACHMENT TO SENSUAL PLEASURES LEAD TO BIRTH AND DECAY

FETTERED BY CRAVING THEY COME TO GRIEF

HE WHO DESIRES PASSIONLESSNESS SHOULD DISCARD CRAVING

As a tree cut down sprouts forth again if its roots remain uninjured and strong, even so when the roots of craving are not destroyed, this suffering arises again and again. [338]

A man who gives way to pleasure will be swept away by craving 1 and his thoughts 2 will make him suffer, like waves. [339]

The streams (craving) flow everywhere. The creeper (craving) sprouts,3 and stands. 4 Seeing the creeper that has sprung up, with wisdom cut off the roots. [340]

A man's joys are always transient, and since men devote themselves to pleasure, seeking after happiness, they undergo birth and decay. [341]

People beset with craving are terrified like a hare caught in a snare; held fast by fetters and bonds 5 they undergo dukkha (round of rebirths) again and again, for a long time. [342]

People beset with craving are terrified like a hare caught in a snare. Therefore a bhikku who wishes his own passionlessness (Nibbana) should eradicate craving. [343]

On one occasion, while the Buddha was on an almsround at Rajagaha, he saw a dirty young female pig and smiled. When questioned by the Venerable Ananda, he replied, 'Ananda, this young pig was a hen during the time of a previous Buddha. As she was staying near a monastery, she used to hear the sound vibration of recitations of the sacred texts. When she died, she was reborn as a princess. One day she noticed maggots in the toilet and became mindful of the loathsomeness of the body, etc. When she died, she was reborn in the Brahma realm as a brahma. But now, due to some evil kamma she accumulated previously, she has been reborn as a pig. Ananda! See how on account of good and evil kamma there is no end to the round of existence.