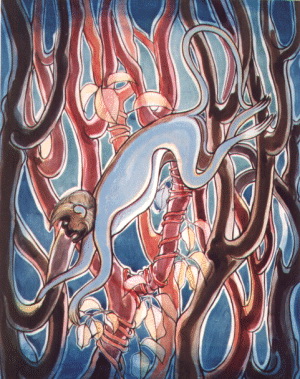 CRAVING ARISES IN THE NEGLIGENT

THOSE WHO CRAVE MULTIPLY THEIR SORROWS

THERE IS NO SORROW FOR THE CRAVING-FREE

CUT OFF CRAVING FROM THE ROOT

The craving 1 of the person addicted to careless living grows like a creeper. He jumps from life to life like a monkey in the forest looking for fruit. [334]

Whoever in this world is overcome by this wretched clinging thirst, his sorrows grow like birana grass after rain. [335]

But whosoever in this world overcomes this wretched craving so difficult to overcome, his sorrows fall away from him like water-drops from a lotus-leaf. [336]

Therefore, I say to you: Greetings to you all who have assembled here! Dig up the root of craving just as one who wishes to have the fragrant root digs up the birana grass. Don't let Mara destroy you again and again, as the flood destroys the reed. [337]

One day, some fishermen of Savatthi caught a fish with a beautiful golden body. Since the fish was so beautiful, they presented it to the king who in turn took the fish to the Buddha. As soon as the fish opened its mouth, a foul smell spread all around the Jetavana monastery. The king then asked the Buddha why such a beautiful fish should have such a foul smell.

The Enlightened One then revealed that the fish in one of his past existences was a learned bhikkhu named Kapila during the time of Kassapa Buddha. Because of his deep knowledge of the Dhamma, he had gained much fame and honour. He also became very conceited and looked down upon the other bhikkhus. When the other bhikkhus pointed out to him what was proper or not proper, he invariably retorted, 'How much do you know?' implying that he knew much more than those bhikkhus. In the course of time, most of the bhikkhus avoided him. On one occasion, the bhikkhus did not join him when he was reciting the Fundamental Precepts for the bhikkhus (i.e., the Patimokkha). Observing that the bhikkhus remained silent, Kapila said, 'There is no such thing as Sutta, Abhidhamma or Vinaya. It makes no difference whether you listen to the Patimokkha or not' and left the congregation. Thus Kapila was hindering the development and growth of the Teaching (Sasana). For his misdeeds, Kapila had to suffer for a long period life after life.

The Buddha then explained that because Kapila had taught the sublime Dhamma to many, he had been endowed with a golden body as a fish, but because he had reviled and abused the bhikkhus and the Dhamma he was afflicted with a stinking breath.

The Enlightened One then delivered a discourse on the benefits of combining learning with practice.