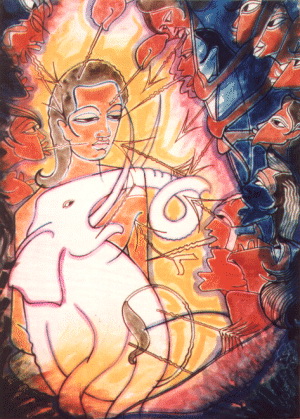 THE MAJORITY ARE UNDISCIPLINED

BLESSED IS HE WHO CONTROLS HIMSELF

As an elephant in the battlefield withstands the arrows shot from a bow,
even so will I endure abuse. Indeed many people are without morality. [320]

Only the trained (horses and elephants) are led to gatherings of people; the king mounts only the trained animal. Noblest among men are the tamed, who endure abuse. [321]

Excellent are trained mules, so are thoroughbred horses of Sindh and noble tusked elephants; but far better is he who has tamed himself. [322]

Magandiya who bore a personal grudge against the Buddha became one of the three queens of King Udena. When Magandiya heard that the Buddha had come to Kosambi, she hired some villains to abuse the Enlightened One when he entered the city on an almsround. These villains followed the Buddha and abused him. Hearing those abusive words, Venerable Ananda pleaded with him to leave the town and go to another place. But he refused and said, 'In another town also we might be abused and it is not practical to move out every time one is abused, especially when one is innocent! It is better to solve a problem in the place where it arises. I am like an elephant in a battlefield, who patiently withstands the arrows that come from all quarters. I also will bear patiently the abuses that come from the people.'