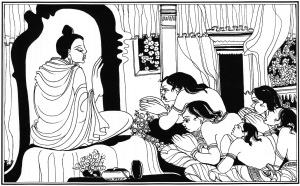 SEE IN WHAT IS WRONG

SEE BOTH RIGHT AND WRONG

Beings who imagine faults in the faultless 1 and perceive no wrong in what is wrong, embrace false views and go to a woeful state. [318]

Beings knowing wrong as wrong and what is right as right, embrace right views and go to a blissful state. [319]

The disciples of an ascetic did not want their children to mix with the children of the followers of the Buddha. They told their children, 'Don't go to the Jetavana monastery, don't pay respects to the bhikkhus of Sakya Muni.' On one occasion, while those children were playing near the Jetavana monastery they felt very thirsty. As the children had been told by their parents not to enter the monastery, they asked one of the boys, a follower of the Buddha, to bring some water for them. The boy went to pay respects to the Teacher after he had taken a drink of water, and told him about his friends who were forbidden by their parents to enter the Jetavana monastery. The Teacher then invited the boys to come and have water at the monastery. When those boys came, he gave them a sermon to suit their various dispositions. As a result, those boys became established in the Triple Gem i.e. the Buddha, the Dhamma and the Sangha.

When the boys went home, they talked about their visit to the Jetavana monastery and about the Buddha's teaching. The parents of the boys, being ignorant, cried 'Our sons have been disloyal to our faith; they have been ruined.' Some neighbours of theirs who were followers of the Buddha explained to them the sublime and glorious characteristics of the Dhamma. Then they began to visit the Jetavana monastery to listen to the religious discourses given by the Buddha. In the end they were all established in the Dhamma.