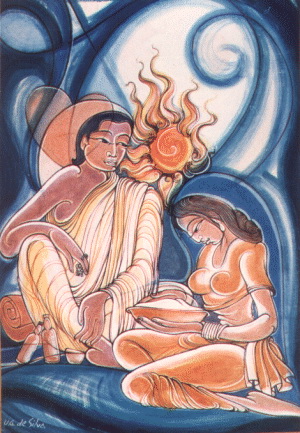 One who tells lies (about others) goes to niraya (a woeful state); one who has done evil and says, 'I didn't do it,' also goes to niraya. Both of them being evil doers, suffer alike (in niraya) in their next existence. [306]

XXII: 01 An evil plot against the Buddha (Sundari)

As the number of people revering the Buddha increased, some heretics found that the number of their following was dwindling. They had lost gain and honour, and no one knew whether they existed or not. Therefore they became very jealous of the Buddha. They were also afraid that things would get worse if they did not do something to destroy the reputation of the Buddha. So, they sent for a young woman called Sundari and said to her, 'Sundari, you are a very beautiful and clever young lady. We want you to put Gotama Buddha to shame by making it appear to others that you are having an affair with him. By doing so, his honour will be destroyed, his followers will decrease and many will come to us. Make the best use of your looks and be crafty.'

The next day, the heretics spread the news of the disappearance of Sundari. They reported to the king who gave them permission to search where they wished. Finding the body near the Jetavana monastery, they reported, 'O King, the followers of Gotama have killed Sundari and have thrown her body near the Jetavana monastery to cover up the misdeed of their Teacher.' The king replied, 'ln that case, you may go around the town and proclaim the fact.'

So they went around the town carrying the dead body of Sundari, shouting, 'Look at what the followers of Gotama have done! See how they have tried to cover up the misdeed of Gotama!' When informed that the heretics were trying to ruin his reputation and honour, the Buddha only said, 'My sons, you just tell them this: One who tells lies goes to hell; one who has done evil and says 'I did not do it' also goes to hell. Both of them, being evil doers, suffer alike in hell and in their future existence.'

The king then ordered his men to investigate the murder of Sundari. On investigation, they found that Sundari had died at the hands of some villains. When brought before the king, the villains admitted that they were hired by the heretics to kill Sundari and dump her body near the Jetavana monastery. The heretics were also brought before the king and they confessed their role in the murder of Sundari. The king then ordered them to go around the town and confess their guilt to the people. So they went around the town saying, 'We have falsely accused the disciples of Gotama just to bring disgrace on him. The disciples of Gotama are innocent, only we are guilty of the crime.' The heretics and the villains were punished for the murder of Sundari. As a result of this episode, the glory and the good name of the Buddha were very much enhanced.