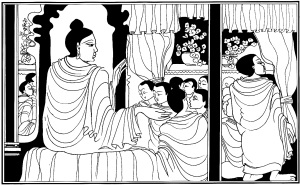 NOT HATRED FOR HATRED

He who seeks his own happiness by inflicting pain on others, being entangled by bonds of enmity, cannot be free from enmity. [291]

XXI: 02 Hatred is only appeased by love*

Once there lived a woman in a village near Savatthi. She kept a hen and every time it laid an egg, the woman would break it up. The hen was very angry and as a result, she was reborn as a cat and the woman was reborn as a hen in the same house. The cat ate up the eggs of the hen. In their next existence, the hen became a leopard and the cat became a deer. The leopard ate up the deer as well as its offspring. Thus their feud continued for several existences. At the time of the Buddha, one of them was born as a woman and the other as an ogress.

On one occasion, the woman was returning from the house of her parents to her own house near Savatthi. Her husband and her young son were also with her. While they were resting near the pond by the roadside, her husband went to have a bath in the pond. At that moment, the woman saw the ogress who appeared in human form and she recognised her as her old enemy. Taking her child, she fled from the spirit straight to the monastery where the Buddha was expounding the Dhamma and put her child at his feet. The ogress who was in hot pursuit of the woman was prevented from entering the monastery. Summoning the ogress to his presence, the Buddha admonished both of them for their long bitter feud, 'If you two had not come to me today, your enmity would have continued endlessly. Enmity cannot be appeased by enmity; it can only be appeased by loving-kindness.' Reflecting on the admonition, both realised the futility of their hatred, both admitted their mistakes and resolved not to continue with their senseless feud.