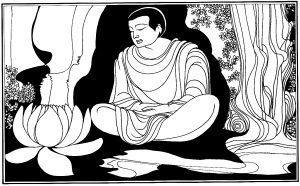 THE IGNORANT REALISE NOT THE NATURE OF DEATH

Once, Mahadhana, a merchant from Benares came to Savatthi during a festival to sell his textiles and other merchandise. When he reached the river bank near Savatthi, he could not cross the river as it was flooded. He was held up for seven days by the flood. By that time, the festival was over.

Since he did not want to return to Benares with his merchandise, he decided to spend some time in Savatthi to sell off his goods. One day, the Buddha while going on an almsround saw the merchant and he smiled. Ananda questioned the Buddha on why he smiled and he replied, 'Ananda, do you see that merchant? He is thinking that he can stay here and sell his goods. He is not aware that the end of his life is very near. What should be done should be done today. To live just one night, mindful, energetic and not disturbed by moral defilements, is to have had a well spent life.'

On the instruction of the Buddha, Ananda advised Mahadhana to practise mindfulness instead of being negligent. On learning about his impending death Mahadhana was alarmed and frightened. So for seven days, he invited the Buddha and other bhikkhus for almsfood and requested the Enlightened One to expound the Dhamma to help him to gain freedom from samsara.

After listening to the sermons given by the Buddha, Mahadhana attained the first stage of Sainthood. Upon his death, he was reborn in the Tusita deva world.