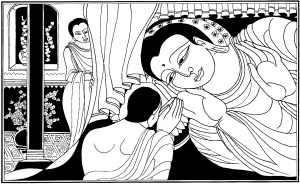 THERE ARE NO AGGREGATES WHICH ARE ETERNAL

THERE ARE NO SAINTS OUTSIDE THE DHAMMA

In the sky there is no track. Outside there is no Saint. There are no conditioned things 5 that are eternal. There is no instability 6in the Buddhas. [255]

Subhadda the wandering ascetic was staying at Kusinara when he heard that the Parinibbana of Gotama Buddha would take place that night. He had already put three questions which were troubling him to other religious leaders, but their answers did not satisfy him. He had not yet asked Gotama Buddha, and he felt that only the Enlightened One could answer his questions. He hurried to the Buddha, but Venerable Ananda tried to persuade him not to go any further. However, the Enlightened One overheard their conversation and consented to see Subhadda, who then asked the three questions:

Are there tracks in the sky?
Are there any Ariya bhikkhus (samanas) outside the Teaching of the Buddha?
Is there any conditioned thing (sankhara) that is permanent?
The Buddha replied in the negative to all the three questions.