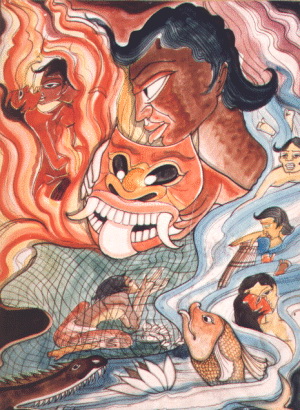 EASY TO SEE ARE OTHERS' FAULTS

Easily seen are others' faults, hard indeed to see are one's own. Like chaff one windows others' faults, but one's own (faults) one hides, as a crafty fowler conceals himself 1 by camouflage. 2 [252]

Once, during his tour of the Anga and Uttara regions, the Buddha went to the town of Bhaddiya. He saw in his vision that the time was ripe for Mendaka, his wife, his son, his daughter-in-law, his granddaughter and his servant to attain Sotapatti. Mendaka was an extremely rich man. He had found a large number of life-sized golden statues of goats in his backyard. For this reason, he was known as Mendaka (a goat), the rich man.

Mendaka and his family, on hearing that the Buddha was coming to Bhaddiya, went to pay homage to him. After hearing the discourse given by the Buddha, the whole family attained the first stage of Sainthood. Mendaka then related how, on his way, some ascetics had spoken ill of the Enlightened One and had tried to dissuade him from coming to see him. The Buddha replied, 'My disciple, it is natural for people not to see one's own faults, and to exaggerate other people's faults and failings.'

The Buddha then revealed the past existences of Mendaka. In one of his former existences he had donated a monastery and a congregation hall to Vipassi Buddha. Then, in yet another of his past existences, he was a rich man in Benares. At that time there was a famine throughout the region. One day, he offered the only food he had left as almsfood to a Paccekabuddha. As a result of this offering, his cooking pot was later found to be miraculously filled up with rice.