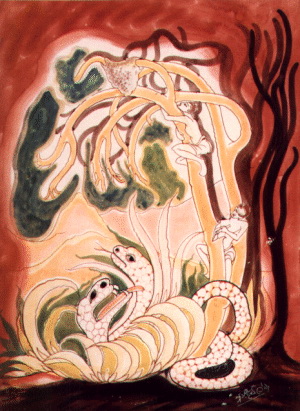 He who has developed a wish for the Ineffable (Nibbana), he whose mind realises it (with the three Fruits), 2 he whose mind is not bound by material pleasures, such a person is called an 'Upstream-bound One'. 3 [218]

XVI: 08 The elderly monk who was reborn in the pure abode

His pupils thought that their teacher had passed away without attaining Sainthood and they felt sorry for him. They asked the Buddha where their teacher was reborn. He replied, 'Bhikkhus! Your teacher, who was an Anagami before he passed away, is now reborn in the abodes of the Brahmas (Suddhavasa Brahmaloka).*He did not reveal his attainment because he felt ashamed that he had achieved only that much. He was ardently striving to attain Arahanthood. Your teacher is now freed from attachment to the sensual world (kamaloka).'