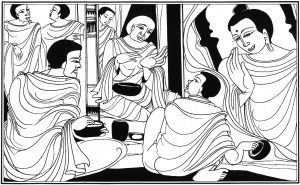 One day, a granddaughter, of Visakha named Sudatta died and she felt very deeply grieved by her loss. So she went to the Buddha and expressed her grief. Then the Buddha said, 'Visakha, don't you realise that many people die in Savatthi every day? If you were to regard all of them as your grandchildren, you would have to be endlessly weeping and mourning. Let not the death of one child affect you too much. Sorrow and fear arise out of affection.'