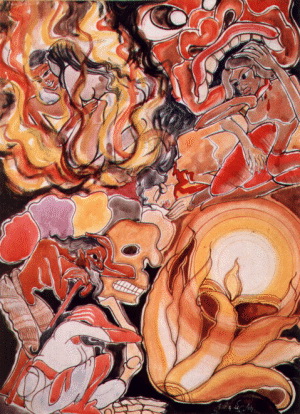 HUNGER IS THE GREATEST AFFLICTION

Hunger1 is the greatest disease. Aggregates 2 are the greatest ill. Knowing this as it really is, (the wise realise) Nibbana, bliss supreme. [203]

XV: 05 The Buddha and a hungry man

One day, the Buddha saw in his vision that a poor man would attain the first stage of Sainthood at the village of Alavi. So he went to the village. It so happened that on that very day the man had lost his ox. So, he went to look for his ox. Meanwhile, the people offered almsfood to the Buddha and the bhikkhus. After the meal, people got ready to listen to the Buddha's discourse, but he waited for the poor man. Finally having found his ox, the man came running to pay his respects to the Buddha. Because he was tired and hungry, and having ascertained that there was still food left* the Enlightened One directed the donors to offer him food first. Only when the man had eaten did the Buddha expound the Dhamma step by step leading to the Four Noble Truths. The poor man attained the first stage of Sainthood at the end of the discourse.

Afterwards, the Buddha and the bhikkhus returned to the Jetavana monastery. On the way, the bhikkhus remarked that it was so surprising that the Buddha should have directed those people to feed the poor man before he gave the discourse. On hearing their remarks, he said, 'Bhikkhus! The sole reason of my coming to Alavi is to expound the Dhamma to the man because I knew he had the abilities to realise the Dhamma. If he was feeling very hungry, the pangs of hunger might have prevented him from comprehending the Dhamma fully. That man had been looking for his ox the whole morning, and was very tired and also very hungry. Bhikkhus! After all, there is no ailment which is so difficult to bear as hunger.'