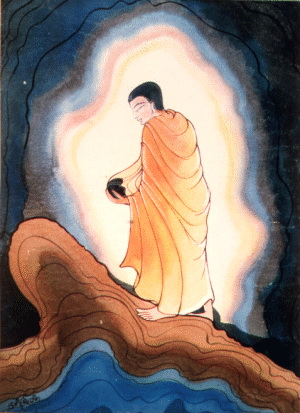 THE RIGHTEOUS ARE HAPPY

A man should not live heedlessly but should exert himself to live righteously. Such a man is happy in this world and in the next. [168]

A man should live righteously and not wrongly. Such a man is happy in this world and in the next. [169]

When the Buddha visited Kapilavatthu for the first time after his Enlightenment he stayed at the Nigrodharama monastery. There he expounded the Dhamma to his relatives. King Suddhodana thought that the Buddha, being his own son, would not go anywhere, but would surely come to the palace for almsfood the next day; but he did not specifically invite the Buddha. However, the next day, he ordered almsfood to be prepared for him and his bhikkhus.

As there was no special invitation for almsgiving on that day, the Buddha and his bhikkhus went for their almsround. Before proceeding he considered within himself, 'Did the Buddhas of the past, upon entering the city of their kinsfolk, straightaway enter the houses of the relatives, or did they go from house to house to receive alms?' Perceiving that they did go from house to house, the Buddha went along the streets of Kapilavatthu seeking alms.

On hearing of this seemingly humiliating conduct of the Buddha from his daughter-in-law, Yasodhara, the King greatly perturbed, went to the Buddha and said, 'Son, why do you ruin me? I am overwhelmed with shame to see you begging alms. Is it proper for you, who used to travel in a golden palanquin, to seek alms in this very city? Why do you put me to shame?'

Whereupon the Buddha replied, 'O King, I am not putting you to shame. I am following the custom of my Buddha lineage. All previous Buddhas have lived by seeking alms.'

The King understood that this was the way of the Buddha's and accepted it.