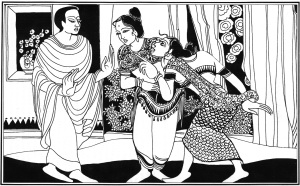 GIVE UP BASE DESIRES

Do not follow a life of evil; do not live heedlessly; do not have false views; do not value worldly things.(In this way one can get rid of suffering). [167]

XIII:01 A bhikkhu who quarrelled with a young girl

Soon after this, the Buddha arrived and learned about the misunderstanding. He knew that time was ripe for the young bhikkhu to attain the first stage of Sainthood, and to make the young bhikkhu more responsive to his words, the Buddha asked Visakha, 'Is there any reason for your grand daughter to address my son as a shaven head just because he has his head shaven? After all, he had his head shaven to enter my Order.' Hearing these words, the young bhikkhu paid his respects to the Buddha, and said 'Venerable Sir! You alone understand me; neither my teacher nor this grandmother understands me.' The Buddha knew that the young bhikkhu was then in a receptive mood to comprehend the Dhamma and so he said, 'To enjoy with sensual desire is ignoble; it is not right and proper to have ignoble thoughts.'