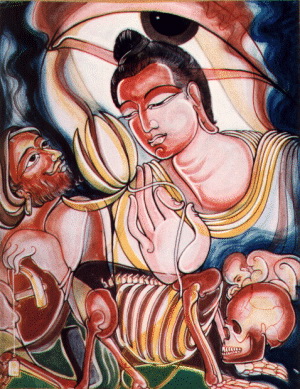 THEY REGRET WHO DO NOT PROGRESS MATERIALLY AND SPIRITUALLY

They who have not led the Holy Life, who in youth have not acquired wealth, pine away like old herons at a pond without fish. [155]

They who have not led the Holy Life, who in youth have not acquired wealth, lie like wornout bows, sighing after the past. [156]

XI:09 How Mahadhana squandered away his wealth

Mahadhana, the son of a rich man, did not study while he was young. When he came of age, he married the daughter of another rich man, who, also had no education. When their parents on both sides died, they became very rich. But both of them were ignorant and knew only how to spend money but not how to save and make it grow. They just squandered their money away. They became very poor and helpless; and because they did not know how to earn a living, they had to go begging.

One day, the Buddha saw the rich man's son in poverty and told Venerable Ananda, 'Look at this son of a very rich man; he has lived an aimless life of pleasure. If he had learnt to look after his money, he would have been a very rich man, or if he had renounced the worldly life, he and his wife could have attained Sainthood. However, because he had done nothing beneficial he has lost all his worldly riches and also lost all opportunities of attaining Sainthood.'