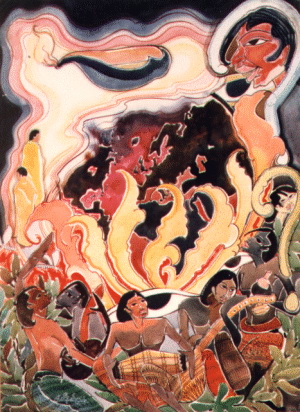 What is laughter, what is joy, when the world is ever burning? 1 Shrouded by darkness, would you not seek the light? [146]

XI: 01 Visakha and her drunken companions

Once, a group of men from Savatthi entrusted their wayward wives to the care of Visakha hoping that under her guidance, they would become religious and virtuous. On one occasion, she accompanied them to a garden at their request. Unknown to Visakha, they brought along liquor to drink and as a result they got drunk. She reprimanded the ladies for their misconduct, and added that their husbands would be very angry with them.

On arrival at the monastery, the ladies again, unknown to Visakha, drank the liquor they had secretly brought along. Visakha requested the Buddha teach them the Dhamma. By that time, the women were all drunk. Mara took the opportunity to encourage them to be bold and soon they were boisterously singing, dancing, clapping and jumping about in the monastery. The Buddha saw the hand of Mara in the shameless behaviour of these women and said to himself, 'Mara must not be given the opportunity.'

So, the Buddha sent forth dark-blue rays from the hair of his eyebrow and the whole room was darkened; the women were frightened and began to get sober. Then the Master vanished from his seat and stood on top of Mt. Sumeru, and from there he sent forth a ray of light and the sky was lit up as if by a thousand moons.

After thus manifesting this phenomenon, the Enlightened One admonished the women, 'You ladies should not have come to the monastery in this unmindful state. Because you have been negligent, Mara has had the opportunity to make you behave shamelessly in the monastery. Now strive to put out the fire of lust and the other evil passions within you.'

The Buddha, after ascertaining that the ladies had by then developed unshaken faith in the Dhamma, returned to the Jetavana monastery. In response to a question by Visakha, he explained the evil of drinking liquor and how countless beings had to suffer pain and unhappiness. At the end of the discourse, those ladies realised the Truth and were established in the path of discipline and mindfulness.