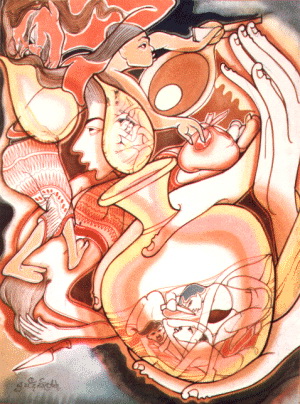 THINK NOT LIGHTLY OF GOOD

Do not think lightly of good, saying: 'It will not come to me'. Even a water-pot is filled by the falling of drops, so the wise man, gathering it drop by drop, fills himself with good. [122]

Once, a man from Savatthi, having heard a discourse given by the Buddha was very much impressed, and decided to practise what was taught. The exhortation was to give in charity not only by oneself but also to get others to do so because by so doing one would gain much merit. So, he invited the Buddha and other bhikkhus for almsfood the next day. Then he went round to each of his neighbours' houses and informed the residents that almsfood would be offered the next day to the Buddha and other bhikkhus and he asked them to contribute according to their wishes. The rich man, Bilala Padaka, seeing the man going round from house to house murmured to himself, 'O this wretched man! Why did he not invite as many bhikkhus as he himself could afford to look after, instead of going round begging from people?' So, he asked the man to bring his bowl and put only a little rice, butter and honey into the bowl. These were taken away separately and not mixed with what others had given. The rich man could not understand why his things were kept separately, and he thought perhaps that the man wanted others to know that a rich man like him had contributed very little and so put him to shame. Therefore, he sent a servant to find out.

The promoter of charity put a little of everything that was given by the rich man into various pots of rice and curry and sweetmeats so that the rich man could gain much merit. His servant reported what he had seen. But Bilala Padaka did not get the meaning and was not sure of the intention of the promoter of charity. However, the next day he went to the place where almsfood was being offered. At the same time, he took a knife with him, intending to kill the chief promoter of charity, if he were to reveal in public just how little a rich man like him had contributed.

But the promoter of charity said to the Buddha, 'Venerable Sir, this charity is a joint offering of all; whether one has given much or little is of no account; each of us has given in faith and generosity; so may all of us gain equal merit.'

When he heard those words, Bilala Padaka realised that he had wronged the man and asked for forgiveness. So he said, 'My friend, I have done you a great wrong by thinking ill of you, please forgive me.' The Buddha heard the rich man asking for pardon and knowing the reason he said, 'My disciple, you should not think lightly of a good deed, however small it may be, for small deeds will become big if you do them habitually.'