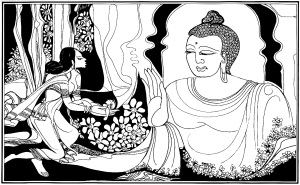 VIII: 14 The children who neglected their mother.* (Bahu Puttika)

Once in Savatthi, there lived a couple, with many children. All the children had got married and the family was doing quite well. Then, the father died and the mother whose name was Bahu Puttika kept all the property without giving anything to the children. Her sons and daughters wanted the inheritance, so they said, 'Mother, now that father is dead, what is the use of you retaining the property? Can we not support you?' They said this again and again, and their mother believed that her children would look after her. So she finally divided up the property without leaving anything for herself.

After the division of the property, she first went to stay with her eldest son, but her daughter-in-law complained and said, 'She has come to stay with us, as if she has given us two shares!' Then Bahu Puttika went to stay with her second son, and the same things were said. Thus, she went from one son to another, and from one daughter to the next; but none of them was willing to support her for a long stretch of time and none paid her due respect.

Greatly disappointed with her children she became a bhikkhuni. Bahu Puttika realised that she became a bhikkhuni only in her old age and that she must not be negligent, but must make use of the remaining period of her life to the utmost. So, for the whole night, she meditated on the Dhamma. The Buddha through supernormal power, saw her from the Jetavana monastery; sent forth his radiance and exhorted her, 'The life of one who does not practise the Dhamma is useless, even if he were to live for a hundred years.' Reflecting mindfully on the advice given by the Buddha, Bahu Puttika attained Arahanthood.