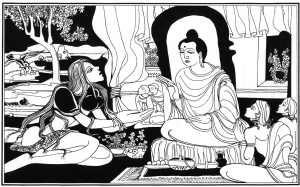 VIII: 12 Patacara is bereft of all her family

Patacara was the daughter of a rich man from Savatthi. She was very beautiful and was well guarded by her parents. But one day, she fell in love and eloped with a young attendant of the family and went to live in a village far away from Savatthi. In due course she became pregnant. As the time for confinement drew near, on several occasions she asked permission from her husband to return to her parents in Savatthi, but her husband, fearing that he would be beaten up by her parents, discouraged her. So, one day, while her husband was away, she set out for the home of her parents. Her husband managed to catch up with her on the way and pleaded with her to return home, but she refused. Since the delivering time was due, she gave birth to a son near a bush. After the birth of her son, she returned home with her husband.

Then, she became pregnant again and she made the same request as before and received the same answer. As the time for the second confinement drew near she again set out for the home of her parents in Savatthi, taking her son with her. Her husband followed her and caught up with her on the way; but her time for delivery was coming on very fast and it was also raining heavily. The husband went to look for a suitable place and while he was clearing a little patch of land, he was bitten by a poisonous snake, and died on the spot. Patacara while waiting for his return, gave birth to her second son. In the morning, she searched for her husband, but only found his dead body. Full of grief, and blaming herself for the death of her husband, she continued on her way to her parents.

Because it had rained incessantly the whole night, the river was swollen so it was not possible for her to cross the river carrying both her sons. Leaving the elder boy on one bank of the river, she crossed the stream with her day-old son and left him on the other bank. She then went back for the elder boy. While she was in the middle of the river, a hawk hovered over the baby thinking it was a piece of meat. She shouted to frighten away the hawk, but it was all in vain; the hawk carried the baby away. Meanwhile, the elder boy heard his mother shouting from the middle of the river and thought she was calling for him. He tried to go to his mother, but was carried away by the strong current. Thus, Patacara lost her two sons as well as her husband.

So she wept and lamented loudly, 'A son is carried away by a hawk, another son is carried away by the current, my husband is also dead, bitten by a poisonous snake!' Then, she met a man from Savatthi and fearfully asked after her parents. The man replied that due to a violent storm in Savatthi the previous night, the house of her parents had fallen down and that both her parents, together with her only brother had died, and had been cremated. On hearing this tragic news, Patacara went stark mad. She did not even notice that her clothes had fallen off from her and that she was half-naked. She went about the streets, shouting out, 'Woe is me!'

At this time the Buddha was preaching at the Jetavana monastery, and he saw Patacara at a distance; so he willed that she should come to the congregation. The crowd seeing her coming tried to stop her saying, 'Don't let the mad woman come in. 'But the Buddha told them not to prevent her coming in. When Patacara was close enough to hear him, he told her to control her mind and to keep calm. As she became aware of herself, she realised that she did not have her skirt on and quietly sat down. Someone gave her a piece of cloth to cover herself. She then told the Buddha how she had lost her sons, her husband, her parents, and her only brother.

The Buddha consoled her, 'Patacara, have no fear; you have now come to one who can protect you and can really guide you. Throughout this round of existences (samsara), the amount of tears you have shed on account of the death of sons, husbands, parents and brothers is voluminous.' Then, the Buddha expounded to her the Anamatagga Sutta,which dealt with countless existences, and she felt relieved and calmed. The Buddha added that one should not worry too much about those who were gone, but that one should purify oneself and strive to realise Nibbana. On hearing this discourse Patacara realised the uncertainty and futility of existence and became established in the Path that leads to the attainment of liberation from Samsara.

Patacara became a bhikkhuni. One day, she was cleaning her feet with water from a water-pot. As she poured the water for the first time, it flowed only a short distance and disappeared; then she poured for the second time and the water went a little farther, but the water she poured for the third time went the farthest. As she looked at the flow and the disappearance of water poured out successively for three times, she came to perceive clearly the three stages in the life of beings. The Buddha, seeing her through his supernormal powers from the Jetavana monastery sent forth his radiance and exhorted her, 'Patacara, you are now on the right path, and you now have the true perception of the component things (khandhas) of life. One who does not perceive the impermanence, unsatisfactoriness and insubstantiality of the component things is useless even if he were to live for a hundred years.' Soon after, Patacara attained Arahanthood.