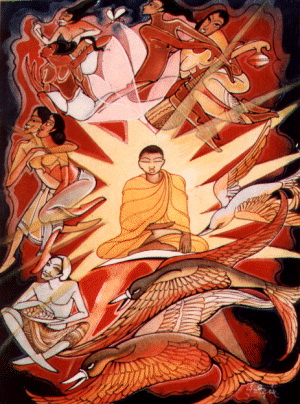 FREE ARE THE UNDEFILED ONES

He whose corruptions are destroyed, he who is not attached to food, he who has Deliverance, which is Void and Signless, as his object, - his path, like that of birds in the air, cannot be traced. [93]

VII: 04 The monk and the goddess (Anuruddha)

One day, Venerable Anuruddha was looking for discarded pieces of cloth to make into a robe as his old robe was getting soiled and torn. Jalini, his wife of a previous existence, who was now in a deva world, saw him. Knowing that he was looking for some cloth, she took three pieces of good material and put them in the rubbish heap, making them barely visible. Anuruddha found the pieces of cloth and took them to the monastery. While he was making the robe, the Buddha arrived with his Chief Disciples and senior disciples and they also helped to stitch the robe.

Meanwhile, Jalini, assuming the form of a young lady, came to the village and heard about the arrival of the Buddha and his disciples and also how they were helping Anuruddha. She urged the villagers to send good delicious food to the monastery and consequently there was more than enough for all. Other bhikkhus, seeing so much surplus, remarked, 'Venerable Anuruddha should have asked his relatives and lay disciples to send just enough food. Maybe, he just wanted to show off that he had so many devotees.' To those bhikkhus, the Buddha said, 'Bhikkhus, don't think my son Anuruddha has asked his relatives and lay disciples to send rice gruel and other food. He did not ask for anything; Arahants do not ask for food and clothing. The excessive amount of food brought to the monastery this morning was due to the promptings of a celestial being.'