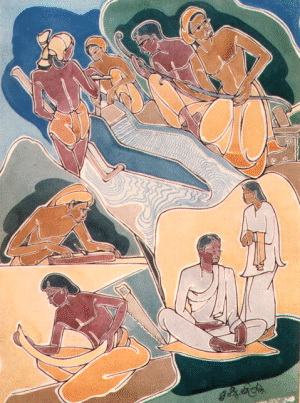 THE WISE CONTROL THEMSELVES

Irrigators lead the waters; fletchers bend the shafts; carpenters bend the wood; the wise control themselves.

Pandita was a son of a well-known man of Savatthi. He became a samanera when he was very young. On the eighth day after becoming a samanera as he was following Venerable Sariputta on an almsround, he saw some farmers channelling water into their fields and asked Sariputta, 'Venerable Sir, can water which has no mind be guided to wherever one wishes?' 'Yes, it can be guided to wherever one wishes,' replied Sariputta as they continued on their way. The samanera next saw those who make arrows heating their arrows with fire and straightening them. Further on, he came across some carpenters cutting, sawing and planing timber to make things like cart-wheels. Then he pondered, 'If water which is without mind can be guided to wherever one desires, if a crooked bamboo which is without mind can be straightened, and if timber which is without mind can be made into useful things, why should I, having consciousness, be unable to tame my mind and practise Tranquillity and Insight Meditation?'

There and then he asked permission from Sariputta and returned to his own room in the monastery. There he ardently and diligently practised meditation, contemplating on the body. The devas also helped him in his meditation by keeping the monastery and its surroundings very quiet and still. Soon after Pandita attained Anagami (the third stage of Sainthood).

At that time Sariputta was going towards the place where the samanera was. The Buddha saw with his supernormal power that Pandita had attained Anagami and also that if he continued to practise meditation he would soon attain Arahanthood. So the Buddha decided to prevent Sariputta from entering the samanera's room. The Buddha went to the door and kept Sariputta engaged by putting some questions to him. While the conversation was taking place, Pandita attained Arahanthood on the eighth day after becoming a novice.

In this connection, the Buddha said, 'When one is earnestly practising the Dhamma,. even devas give protection and keep guard; I myself have kept Sariputta engaged at the door so that Pandita could attain Arahanthood.'