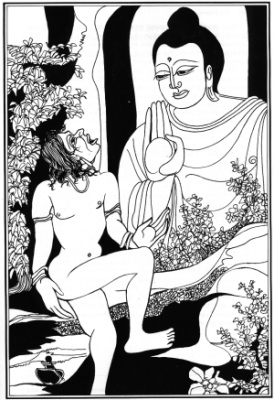 Month after month a fool may eat only as much food as can be picked up on the tip of a kusa grass blade,[1] but he is not worth a sixteenth part of those who have comprehended the Truth.[2]

V:11 The ascetic who deceived others (Jambuka)

Jambuka was the son of a rich man in Savatthi. Due to his past evil deeds he was born with very peculiar habits. As a child, he wanted to sleep on the floor with no proper bed, and preferred to take his own excreta for food instead of rice. When he grew older, his parents sent him to the ascetics. When those ascetics found out about his peculiar habits they drove him away. At night he ate human excreta and in the day time he stood still on one leg and kept his mouth open. He used to say that he kept his mouth open because he only lived on air and that he stood on one leg because he was too heavy for the earth to bear him. 'I never sit down, I never go to sleep,' he boasted.

Many people believed him and some would come to him with offerings. Jambuka would refuse them and say, 'I don't take any food except air.' When entreated he would take just a little bit of food with the tip of a blade of grass and say, 'Now go, this little will give you enough merit.' In this way, Jambuka lived for many years, naked and taking excreta in secret.

One day, however, the Buddha saw in his vision that Jambuka would be able to attain Arahanthood within a short time. So, in the evening, he went to see Jambuka and asked for a place to spend the night. Jambuka pointed out to him a mountain-cave where he himself was staying. When the Buddha was resting there, the devas came to pay homage to him. The forest was lit up with their radiance and Jambuka saw the light. In the morning, he went to the Buddha and enquired about the brightness.

When told about the devas who had come to pay homage to the Buddha, Jambuka was very much impressed, and remarked, 'You must indeed, be a spiritually great person for the devas to come and pay homage to you. As for me, even though I have practised austerity for fifty-five years, living only on air and standing only on one leg, none of the devas has ever come to me.' The Buddha replied, 'O Jambuka! You have been deceiving others, but you cannot deceive me. I know that for many years you have been eating excreta and sleeping on the ground.'

Furthermore, the Buddha explained to him how in one of his past existences during the time of Kassapa Buddha, Jambuka had prevented a monk from going to the house of a devotee where almsfood was being given and how he had also thrown away the food that was sent with him for that monk. It was because of these evil deeds that he had such peculiar habits of eating excreta and sleeping on the bare ground. Jambuka then realised his mistake and deeply regretted having deceived other people. He went down on his knees and the Buddha gave him a piece of cloth to cover himself. The Buddha then delivered a discourse. At the end of the discourse Jambuka attained Arahanthood and joined the Holy Order on the spot.

Soon after this, Jambuka's pupils also arrived and they were surprised to see their teacher with the Buddha. Bhikkhu Jambuka then announced he had joined the Holy Order and that he was now only a disciple of the Enlightened One. The Buddha explained to them that although their teacher had practised various austerities,it was not worth even one-sixteenth[*]part of his present practice and achievement.