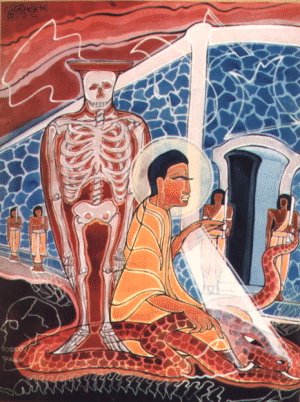 FORTIFY YOUR MIND AND BE NON-ATTACHED

Realizing that this body is (as fragile) as a jar, establishing this mind (as firm) as a (fortified) city, he should attack Mara1with the weapon of wisdom. He should guard his conquest2and be without attachment.

III:06 The spirits which disturbed the monks

A group of bhikkhus from Savatthi, after each obtaining a subject of meditation from the Buddha, travelled to a place far away and came to a large forest grove, a suitable place for meditation. The guardian spirits of the trees dwelling in that forest thought that if those bhikkhus were staying in the forest, it would not be proper for them to live with their families in the trees. So, they descended from the trees, thinking that the bhikkhus would stop there only for one night. But the bhikkhus were still there at the end of a fortnight and it occurred to them that the bhikkhus might be staying there till the end of the rainy season. They realised that if that was so they and their families would have to live on the ground for a long time. So, they decided to frighten away the bhikkhus by making ghostly sounds and frightful visions. They showed up with bodies without heads, and with heads without bodies, etc. The bhikkhus were very upset and left the place and returned to the Buddha, and related everything to him. The Buddha told them that this had happened because previously they went without any weapon and that they should go back there armed with a suitable weapon. So saying, the Buddha taught them the entire Metta Sutta, the discourse on Loving-Kindness, as their weapon.

The bhikkhus were instructed to radiate their loving-kindness to all beings that inhabit the earth while reciting the Metta Sutta. They should harbour no ill-will or fear towards any being. Thus the bhikkhus returned to the forest grove and did exactly as they were told. The guardian spirits of the trees, on receiving loving-kindness from the bhikkhus, reciprocated by readily welcoming and not harming them. They willingly stayed on the ground and so much harmony and peace was generated. There were no more ghostly sounds and ungainly sights. Thus left in peace, the bhikkhus meditated on the body and came to realise its fragile and impermanent nature.

2By conquest is here meant the newly developed insight (vipassana).

3For the Jhanas (absorptions or ecstasies) which the aspirant has developed. The Jhanas are highly developed mental states obtained by intensified concentration.