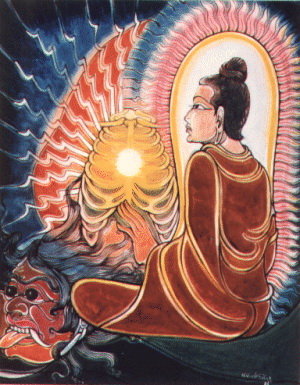 TO THE VIGILANT THERE IS NO FEAR

He whose mind is not steadfast, he who knows not the true doctrine, he whose confidence wavers — the wisdom1of such a one will never be perfect.
He whose mind is not soaked (by lust), he who is not affected (by hatred), he who has transcended both good and evil2— for such a vigilant3one there is no fear.

A man from Savatthi, after looking for his lost ox in the forest, felt very hungry and went to a village monastery, where he was given some food to eat. While taking his food, it occurred to him that even though he worked hard every day, he could not get such good food and that it might be a good idea to become a monk.

So he asked the bhikkhus to admit him into the Order. At the monastery, he performed the duties of a bhikkhu and as there was plenty of food he soon gained weight. After some time, he got weary of going round for almsfood and returned to the life of a layman. A few days later, he felt that life at home was too strenuous and he went back to the monastery to be admitted as a bhikkhu for a second time. For a second time, he left the Order and returned to home-life. Again, he went back to the monastery for a third time and left it. This shuttling process went on for six times, and because he acted only according to his whims, he was known as Citta Hatta. While he was going back and forth between his home and the monastery, his wife became pregnant. He was actually not ready for renunciation but he joined the Order for his convenience. As a result he was not happy either as a monk or as a layman.

One day, during his last stay at home, he happened to enter the bedroom while his wife was asleep. She was fast asleep snoring loudly and saliva was trickling down her mouth. Seeing her with her mouth open, he realised the unpleasant nature of the body, and he reflected, 'I have been a bhikkhu for several times but I have not been able to remain in the robe because of my attraction for this woman.' Hence, taking the yellow robe with him he left his home for the monastery for the seventh time. As he went along he repeated the words 'impermanence' and 'unsatisfactoriness' and thus attained the first stage of Sainthood on the way to the monastery.

On arrival at the monastery, he requested the bhikkhus to admit him into the Order. They refused and said, 'We cannot admit you anymore. You have been shaving your head so often that your head is like a whetting stone.' Since he persisted with his request, the bhikkhus relented, and he was readmitted into the Order. Within a few days, Citta Hattha attained Arahanthood. Other bhikkhus, seeing him staying on for a long time in the monastery, were surprised and they asked him the reason. He replied, 'I went home when I still had attachment in me, but now the attachment has been cut off.' The bhikkhus reported the matter to the Buddha who replied,'Cittha Hattha's mind was not steadfast at that time and he did not understand the Dhamma. But now he is already an Arahant.

2The deeds of an Arahant, a perfect Saint, are neither good nor bad because he has gone beyond both good and evil. This does not mean that he is passive. He is active but his activity is selfless and is directed to help others to tread the path he has trod himself. His deeds, ordinarily accepted as good, lack creative power as regards himself in producing Kammic effects. He is not however exempt from the effects of his past actions. He accumulates no fresh kammic activities. Whatever actions he does, as an Arahant, are termed 'inoperative' (kiriya), and are not regarded as Kamma. They are ethically ineffective. Understanding things as they truly are, he has finally shattered the cosmic chain of cause and effect.

3It should not erroneously be understood that Arahants do not sleep. Whether asleep or awake they are regarded as sleepless or vigilant ones, since the five stimulating virtues — namely, confidence (saddha), energy (viriya), mindfulness (sati), concentration (samadhi), and wisdom (panna) are ever present in them.

* It might be asked whether Citta Hatta was wrong in having abandoned his wife. We must understand this story from a historical viewpoint. In India, at the time of the Buddha, it was considered quite honourable for a man to give up the worldly life and take to the monastic life at anytime. The social structure was such that other members of the family would willingly care for the wife and the child because the husband had made a big sacrifice in becoming a holy man.