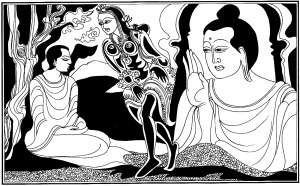 A BRAHMANA GIVES UP CRAVING

He who in this world giving up craving, would renounce worldly life and become a homeless one, he who has destroyed craving and has come to the end of existence, - him I call a brahmana. [416]

Soon after the passing away of the previous Buddha (Kassapa), an Arahant monk went round for donations to build a stupa where the relics of Kassapa Buddha were to be enshrined. The monk came to the house of a goldsmith who was at that time engaged in a heated quarrel with his wife. He shouted at the monk, 'You had better throw away the relics and go back.' His wife then said, 'If you are angry with me you should abuse only me. You can even beat me if you like, but why do you have to abuse the Buddha and the monk? Surely you have done a grievous wrong!' Hearing her remarks the goldsmith realised the enormity of the wrong he had done. Seeking to correct the wrong, he made some gold flowers, put them into three gold pots and offered them to the stupa of Kassapa Buddha.

In his present existence, he was conceived in the womb of a rich man's daughter who had an illicit love affair. When the child was born, she put it into a pot and floated it down the stream. A young woman who was bathing in the stream saw the child; adopted him and named him Jatila. Later, on the advice of a monk, the woman sent Jatila to Taxila where he had his education. While at Taxila the monk arranged for him to stay at the house of a merchant who was a disciple of his. In due course, Jatila married the daughter of the merchant. Soon after the marriage a large mound of gold was discovered in the backyard of the house which was newly built for the couple. Three sons were born out of his marriage. After that, Jatila joined the Order and attained Arahanthood.

One day, as the Buddha went on an almsround with some bhikkhus, including Jatila, they came to the house of the sons of Jatila. The sons offered almsfood to the Buddha and his disciples for fifteen days. Some time afterwards, the bhikkhus asked Jatila whether he was still attached to his mound of gold and his sons and he answered that he had no more attachment to them. The bhikkhus then reported what Jatila had said to the Buddha and the Buddha replied, 'Bhikkhus! Jatila has got rid of craving and pride. He has attained Arahanthood.'