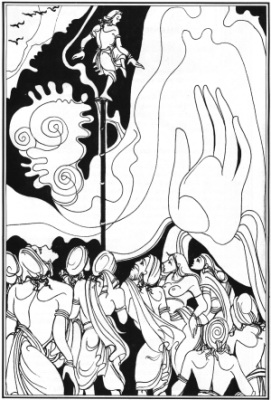 Riches destroys the foolish; but not those who seek the other shore (i.e. Nibbana). By his craving for riches the fool destroys himself, as he would destroy others. [355]

On one occasion, King Kosala came to pay homage to the Buddha. He explained to the Buddha that he was late because earlier that day a rich man had died in Savatthi without leaving any heirs, and all his property had to be removed to the Royal Treasury. Then he proceeded to relate that although this man was very rich, he was also very stingy. When alive, he did not practise charity. He was reluctant to spend his money even on himself and therefore ate very sparingly and wore cheap, coarse clothes only. On hearing this, the Buddha revealed that in a past existence, this man had also been rich. One day, when a Paccekabuddha came to his house, he told his wife to offer almsfood. She thought that it was very rarely that her husband gave her permission to give anything to anybody. So, she filled up the alms-bowl with some food. When the rich man saw that his wife had offered a substantial amount of food to the Paccekabuddha he thought, 'Oh, this monk will only have a good sleep after a heavy meal. It would have been better if my servants were given this good food. At least, they would have given me better service.' By thinking in this way he regretted his generosity. This same man had a brother who was also rich and who had only one son. Coveting his brother's wealth, the man killed his young nephew and thus inherited his brother's wealth on the latter's death.

Because the man had offered almsfood to the Paccekabuddha, he became a rich man in his present life; because he regretted having offered food to the Paccekabuddha, he had no wish to spend anything even on himself; because he had killed his own nephew for the sake of his brother's wealth he had to suffer in hell for a long period. His bad kamma having come to an end, he was born into the human world but here also he had not accumulated any good kamma. The king remarked, 'Venerable Sir, even though he had lived here in the lifetime of the Buddha himself he had not made any offering to anybody. Indeed he has missed a very good opportunity.'