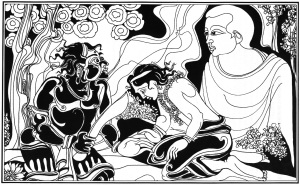 THE LUSTFUL ARE CAUGHT IN THEIR OWN WEB

Those who are infatuated with lust fall back into the stream as (does) a spider into the web spun by itself. The wise, cutting off the bond of craving, walk on resolutely, leaving all ills (dukkha) behind. [347]

Queen Khema was the chief consort of King Bimbisara. She was very beautiful and also very proud. The king wanted her to go to the monastery and pay homage to the Buddha. But she had heard that the Buddha always preached about the futility of beauty and she therefore tried to keep away from him. The king understood her attitude. He also knew how proud she was of her beauty. So he ordered his court musicians to sing in praise of the Veluvana monastery; about its pleasant and peaceful atmosphere, etc. Hearing them, Khema became interested and decided to go to the monastery.

When she arrived at the monastery, the Buddha was expounding the Dhamma. By his supernormal power, he created a vision of a very beautiful young lady sitting not far from him and fanning him. When Khema came to the audience hall, she saw the beautiful young lady. Comparing the exquisite beauty of the young lady to that of her own. Khema realised that her beauty was much inferior to that of the young lady. As she looked again intently, she saw that the beauty of the young lady began to fade gradually. In the end, she saw before her eyes, an old decrepit being, which again changed into a corpse, her stinking body being attacked by worms. At that instant, Khema realised the impermanence of beauty.

The Buddha knowing the state of her mind remarked, 'O, Khema! Look carefully at this decaying body which is built around a skeleton of bones and is subject to disease and decay. Reflect mindfully on the body which is thought of so highly by the foolish. Reflect mindfully on the worthlessness of the beauty of youth.' After reflecting on the admonition given by the Buddha, Khema attained Arahanthood. Later she joined the Holy Order and became the chief female disciple of the Buddha.