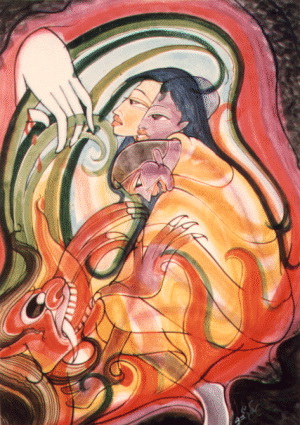 A LIFE OF DUBIOUS HOLINESS IS NOT COMMENDABLE

WHAT IS PROPER SHOULD BE DONE WITH ONE'S WHOLE MIGHT

Just as kusa grass, wrongly grasped, cuts the hand, even so the monkhood wrongly handled drags one to a woeful state. [311]

Any loose act, any corrupt practice, a life of dubious 1 holiness - none of these is of much benefit. [312]

If there is anything to be done, do it well; do it firmly and energetically; for the slack life of a bhikkhu scatters much dust (of moral defilements). [313]

Once, there was a bhikkhu who was feeling remorseful for having unwittingly cut some plants. He confided this to another bhikkhu who replied, 'Cutting plants is a very minor offence; * you only have to confide and confess to another bhikkhu. There is nothing to worry about.' So saying, the second bhikkhu proceeded to uproot some plants with both hands to show that he thought very little of such trivial offences. When the Buddha advised the monk he was reckless and stubborn at first.

At the end of the discourse however, the reckless, obstinate bhikkhu realised the importance of restraint in the life of a bhikkhu and thereafter he strictly observed the Precepts. Later, through practice of Insight Meditation, he attained Arahanthood.

* The rule to avoid destruction of plants may seem trivial and impractical but what the Buddha is emphasizing is the respect for all forms of life, however low, because all life forms are dependent on each other. Today, we can appreciate the Buddha's wisdom in advising us against the wanton destruction of the environment.