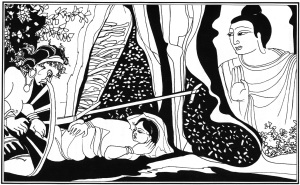 THE DEVOUT ARE RESPECTED EVERYWHERE

Like the Himalayas, the good are visible even from afar; like arrows shot in the night, the wicked are not seen even though they may be near. [304]

XXI: 08 Distance is not the problem (Cula Subhadda)

Both Anatha Pindika and Ugga studied under the same teacher when they were young. Ugga had a son while Anatha Pindika had a daughter. When their children came of age, Ugga asked for the consent of Anatha Pindika to the marriage of their two children. After the marriage, Cula Subhadda, the daughter of Anatha Pindika, had to stay in the house of her parents-in-law. Ugga and his family were not followers of the Buddha. Sometimes they invited naked ascetics to their house. On such occasions, her parents-in-law would ask Cula Subhadda to pay respects to those naked ascetics. Feeling shy and not being used to seeing naked ascetics she refused to comply. Instead she told her mother-in-law about the Buddha and his unique qualities.

On hearing this the mother-in-law was very anxious to meet the Enlightened One. She even agreed to let Cula Subhadda invite the Buddha to their house for almsfood. So Cula Subhadda prepared food and collected other offerings for the occasion. She then went upstairs and looking towards the Jetavana monastery, she made offerings of flowers and incense and contemplated on the unique qualities and virtues of the Buddha. She then spoke out her wish, 'Venerable Sir! I respectfully invite you and your noble bhikkhus to our house tomorrow for almsgiving. May this invitation of mine be made known to you by this symbol and gesture.'

Back at the monastery, Anatha Pindika, the father of Cula Subhadda, approached the Buddha to invite him to have almsfood in his house the following day, but the Enlightened One replied that he had already accepted Cula Subhadda's invitation for the next day. Anatha Pindika was puzzled at the reply and said, 'But Venerable Sir! Cula Subhadda does not live here in Savatthi, she lives far away from here'. The Buddha said, 'True, householder, but the good are clearly visible as if they are in one's very presence even though they may be living at a distance.'