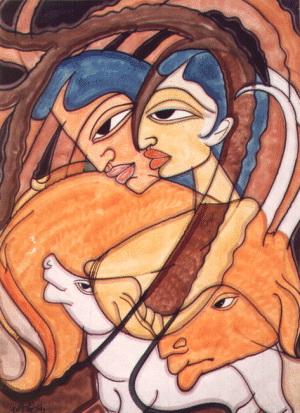 Watchful of speech, well restrained in mind, let him do no evil with the body; let him purify these three ways of action, and attain the Path made known by the Sages. [281]

Once, when Venerable Moggallana was coming down a hill with bhikkhu Lakkhana, he saw a miserable, ever-hungry spirit (peta), with the head of a pig and the body of a human being. On seeing the peta, Moggallana just smiled*in order to indicate he had seen this particular peta. Back at the monastery, when questioned by Lakkhana as to why he smiled, Moggallana said he saw a peta with its mouth swarming with maggots. The Buddha added that he himself had seen that very peta soon after his attainment of Buddhahood. Then he proceeded to relate the story about the peta.

During the time of a previous Buddha, this particular peta was a bhikkhu who often expounded the Dhamma. On one occasion, he came to a monastery, where two bhikkhus were staying together. After staying with the two bhikkhus for some time, he found that the people liked his way of expounding the Dhamma. Then he thought it would be even better if he could make the two bhikkhus leave the monastery and have the place all to himself. Thus he set one against the other. The two bhikkhus quarrelled and left the monastery. On account of this evil deed, that bhikkhu had to suffer for a long period after his death. In his present existence, he was suffering as a pig peta. Then the Buddha exhorted, 'A bhikkhu should be calm and well-restrained in thought, word and deed.'

* When Arahants and Buddhas smile, it is not an expression of humour. Rather it is a sign to whoever is with them to question them on what prompted the smile.