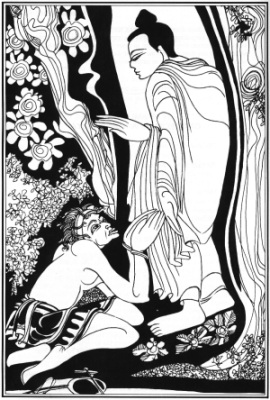 A BHIKKHU SHOULD NOT BE CONTENTED UNTIL HE DESTROYS ALL PASSIONS

Not only by mere morality and austerities 1 nor again by much learning 2, nor even by developing mental concentration, nor by secluded lodging, (thinking) 'I enjoy the bliss of renunciation not resorted to by the worldling' 3 (not with these) should you, O bhikkhu, be content 4without reaching the extinction of the corruptions. 5 [271-272]

XIX: 10 It is not easy to become an Arahant

Once, there were some bhikkhus who were endowed with virtue; some who had strictly observed the austere practices (Dhutanga) and some who had achieved the third stage of Sainthood. All of them thought that since they had achieved that much, it would be quite easy for them to attain Arahanthood. With this thought they went to see the Enlightened One who asked them, 'Bhikkhus, have you attained Arahanthood?' When they replied that they were in such a condition that it would not be difficult for them to attain Arahanthood, the Buddha admonished them, 'Bhikkhus, just because you are endowed with morality (sila) and because you have attained Anagami (the third stage of Sainthood), you should not be complacent and think that there is only a little more to be done. Unless you have eradicated all mental defilements (asavas), you must not think that you have realized the perfect bliss of Arahanthood.'