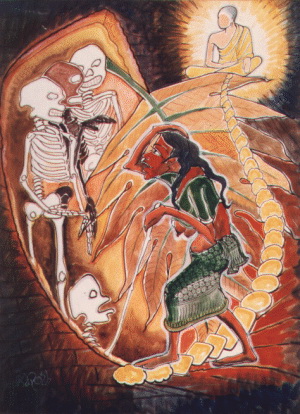 Just as rust is formed from iron, and corrodes the iron from which it is formed,
so also, his own deeds lead the transgressor 1 to a lower plane of existence. [240]

XVIII: 03 A monk who was born as an insect (Tissa)

Once there was a monk in Savatthi named Tissa. One day, he received a set of fine robes and was very pleased. He wanted to wear them the next day, but he died that very night, and because he was unduly attached to the fine set of robes, he was reborn as an insect and lived within the folds of the robes. As there was no one to inherit his belongings, it was decided that this particular set of robes should be shared by the other monks. When the monks were preparing to share it out among themselves, the insect was very much agitated and cried out, 'They are destroying my robes!' The Buddha,on hearing his cry by means of his supernormal powers of hearing, advised the bhikkhus to dispose of the robes only at the end of seven days. On the eighth day, the robes which belonged to Tissa were shared out by the bhikkhus.

Later, the Buddha explained the reasons for his admonition. 'Tissa was attached to this particular set of robes at the time of his death and so he was reborn as an insect for a few days and stayed in the folds of the robes. When you all were preparing to share out the robes, Tissa the insect was very much in agony and was running about to and fro in the folds of the robes. If you had taken the robes at that time, Tissa the insect would have felt very bitter against you and he would have had to be born in a suffering state. Now, however, he has been reborn in a happy state due to his previous kamma and that is why I have allowed you to take the robes. Indeed bhikkhus, attachment is very dangerous; as rust corrodes iron from which it is formed, so also, attachment destroys one and sends one to lower forms of existence. A bhikkhu should not indulge too much in the use of the four requisites or be attached to them. because attachment will delay the process of mental purification.